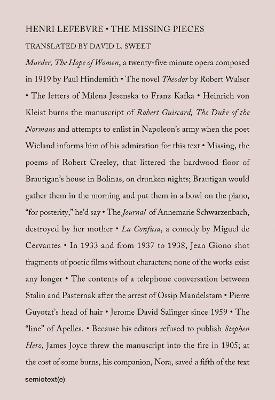 An incantatory catalog of cultural artifacts either lost to time or never realized.. A boarder for two years following a national funeral, Mirabeau is removed from the Pantheon and transferred to the cemetery of Clamart when his pornographic novels are discovered . A photograph taken by Hessling on Christmas night, 1943, of a young woman nailed alive to the village gate of Novimgorod; Hessling asks his friend Wolfgang Borchert to develop the film, look at the photograph, and destroy it . The Beautiful Gardener, a picture by Max Ernst, burned by the Nazis
-from The Missing PiecesThe Missing Pieces is an incantatory text, a catalog of what has been lost over time and what in some cases never existed. Through a lengthy chain of brief, laconic citations, Henri Lefebvre evokes the history of what is no more and what never was- the artworks, films, screenplays, negatives, poems, symphonies, buildings, letters, concepts, and lives that cannot be seen, heard, read, inhabited, or known about. It is a literary vanitas of sorts, but one that confers an almost mythical quality on the enigmatic creations it recounts-rather than reminding us of the death that inhabits everything humans create. Lefebvre's list includes Marcel Duchamp's (accdidentally destroyed) film of Man Ray shaving off the Baroness Elsa von Freytag-Loringhoven's pubic hair; the page written by Balzac on his deathbed (lost); Spinoza's Treatise on the Rainbow (thrown into a fire); the final seven meters of Kerouac's original typescript for On the Road (eaten by a dog); the chalk drawings of Francis Picabia (erased before an audience); and the one moment in Andre Malraux's life in which he exclaimed "I believe, for a minute, I was thinking nothing." The Missing Pieces offers a treasure trove of cultural and artistic detail and will entertain even those readers not enamored of the void.

» Have you read this book? We'd like to know what you think about it - write a review about The Missing Pieces book by Henri Lefebvre and you'll earn 50c in Boomerang Bucks loyalty dollars (you must be a Boomerang Books Account Holder - it's free to sign up and there are great benefits!)


A Preview for this title is currently not available.
More Books By Henri Lefebvre
View All