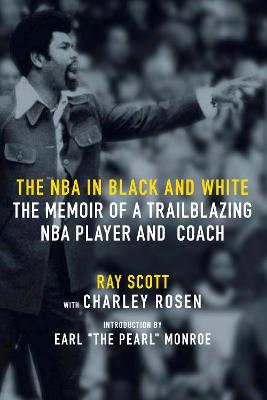 The NBA In Black And White: The Memoir of a Trailblazing NBA Player and Coach

Description - The NBA In Black And White: The Memoir of a Trailblazing NBA Player and Coach by Ray Scott

A memoir of hard lessons learned in the racially segregated and sometimes outright racist NBA of the early '60s by celebrated NBA player and the first Black Coach of the Year, Ray Scott. Introduced by Earl "the Pearl" Monroe.

"There's a basic insecurity with Black guys my size," Scott writes. "We can't hide and everybody turns to stare when we walk down the street. ... Whites believe that their culture is superior to African-American culture. ... We don't accept many of their answers, but we have to live with them."

Ray Scott was part of the early wave of Black NBA players like Bill Russell, Wilt Chamberlain, and later Kareem Abdul-Jabbar, who literally changed how the game of professional basketball is played-leading to the tremendously popular financial blockbuster the NBA is today. Scott was a celebrated 6'9" forward/center after being chosen by the Detroit Pistons as the #4 pick of the 1961 NBA draft, and then again after he was named head coach of the Pistons in October 1972, winning Coach of the Year in the spring of 1974-the first black man ever to capture that honor.

Scott's is a story of quiet persistence, hard work, and, most of all, respect. He credits the mentorship of NBA player and coach Earl Lloyd, and talks about fellow Philly native Wilt Chamberlain and friends Muhammad Ali and Aretha Franklin, among many others. Ray has lived through one of the most turbulent times in our nation's history, especially the time of assassinations of so many Black leaders at the end of the 1960s. Through it all, his voice remains quiet and measured, transcending all the sorrows with his steadiness and positive attitude. This is his story, told in collaboration with the great basketball writer, former college player and CBA coach Charley Rosen.

Buy The NBA In Black And White: The Memoir of a Trailblazing NBA Player and Coach by Ray Scott from Australia's Online Independent Bookstore, Boomerang Books.

Book Reviews - The NBA In Black And White: The Memoir of a Trailblazing NBA Player and Coach by Ray Scott

» Have you read this book? We'd like to know what you think about it - write a review about The NBA In Black And White: The Memoir of a Trailblazing NBA Player and Coach book by Ray Scott and you'll earn 50c in Boomerang Bucks loyalty dollars (you must be a Boomerang Books Account Holder - it's free to sign up and there are great benefits!)


A Preview for this title is currently not available.
More Books By Ray Scott
View All