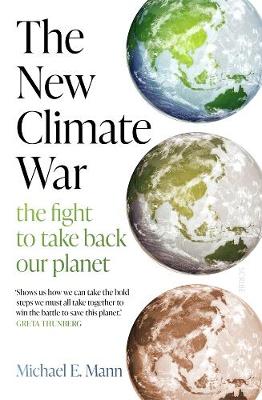 The New Climate War: The fight to take back our planet

Description - The New Climate War: The fight to take back our planet by Michael E Mann

A renowned climate scientist shows how fossil-fuel companies have waged a thirty-year campaign to deflect blame and responsibility and to delay action on climate change, and offers a battle plan for how we can save the planet.

Recycle. Fly less. Eat less meat. These are some of the ways that we've been told can slow climate change. But the inordinate emphasis on behaviour is the result of a marketing campaign that has succeeded in placing the responsibility for fixing climate change squarely on the shoulders of individuals.

Fossil-fuel companies have followed the example of other industries deflecting blame (think 'Guns don't kill people, people kill people') or greenwashing. Meanwhile, they've blocked efforts to regulate or price carbon emissions, have run PR campaigns aimed at discrediting viable alternatives, and have abdicated their responsibility to fix the problem they've created. The result has been disastrous for our planet.

In The New Climate War, Mann argues that all is not lost. He draws the battle lines between the people and the polluters - fossil-fuel companies, right-wing plutocrats, and petro-states. And he outlines a plan for forcing our governments and corporations to wake up and make real change, including-

a common-sense, attainable approach to carbon pricing - and a revision of the well-intentioned but flawed currently proposed version of the Green New Deal;
allowing renewable energy to compete fairly against fossil fuels;
debunking the false narratives and arguments that have worked their way into the climate debate and driven a wedge between even those who support climate-change solutions; and
combatting climate doomism and despair-mongering.

With immensely powerful vested interests aligned in defence of the fossil-fuel status quo, the societal tipping point won't happen without the active participation of citizens everywhere aiding in the collective push forward. This book will reach, inform, and enable citizens everywhere to join this battle for our planet.

'Mann shows that corporations and lobbyists have been successful in convincing us that climate change will be fine, if we just recycle our bottles and turn out the lights. Instead, he says, global warming is a problem way too hot for any one person to handle. He's optimistic though, because he sees what we really can and will do. Read his book, and let's get to work.'
-Bill Nye, science educator, CEO of The Planetary Society

'Fossil fuel companies have, for decades longer than I have been alive, been the largest contributors to the climate crisis that affects my generation today - all in pursuit of profits and growth. In The New Climate War, Michael Mann holds them to account, and shows us how we can take the bold steps we must all take together to win the battle to save this planet.'
-Greta Thunberg, climate activist

'This book takes the reader behind the front lines into the decades long information war waged by the fossil fuel industry and those that share their interests. From his perspective as a leader in the battle for scientific reason, Michael Mann provides hope and a roadmap for all of us to address the systemic issues fuelling climate change, and shows how we can come together to wage a new war in the fight for our future.'
-Leonardo DiCaprio, actor and environmental activist

'One of the world's leading climate scientists embarks on a journey into the minds of climate change deniers to try to understand their motivations and strategies ... Blunt, lucid ... Consistently displaying his comprehensive command of climate science and the attendant politics ... An expert effectively debunks the false narrative of denialism and advocates communal resistance to fossil fuels.'
-Kirkus Reviews

Buy The New Climate War: The fight to take back our planet by Michael E Mann from Australia's Online Independent Bookstore, Boomerang Books.

Book Reviews - The New Climate War: The fight to take back our planet by Michael E Mann

» Have you read this book? We'd like to know what you think about it - write a review about The New Climate War: The fight to take back our planet book by Michael E Mann and you'll earn 50c in Boomerang Bucks loyalty dollars (you must be a Boomerang Books Account Holder - it's free to sign up and there are great benefits!)


A Preview for this title is currently not available.
More Books By Michael E Mann
View All