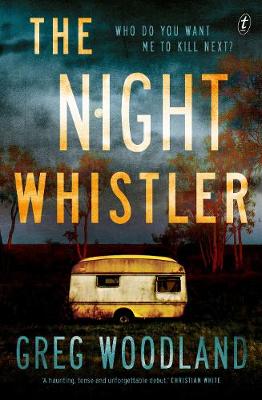 Are you lonesome tonight... It's 1966. Hal and his little brother, newly arrived in Moorabool with their parents, are exploring the creek near their new home when they find the body of a dog.

Not just dead, but recently killed.

Not just killed, but mutilated.

Constable Mick Goodenough, recently demoted from his city job as a detective, is also new in town-and one of his dogs has gone missing. He's experienced enough to know what it means when someone tortures an animal to death- it means they're practising. So when Hal's mother starts getting anonymous calls-a man whistling, then hanging up-Goodenough, alone among the Moorabool cops, takes her seriously.

The question is- will that be enough to keep her safe?

» Have you read this book? We'd like to know what you think about it - write a review about The Night Whistler book by Greg Woodland and you'll earn 50c in Boomerang Bucks loyalty dollars (you must be a Boomerang Books Account Holder - it's free to sign up and there are great benefits!)

4.5?s The Night Whistler is the first novel by Australian author, Greg Woodland. The dog has been cruelly killed, and the boys are shocked, but there by the creek Hal and his little brother, Evan can’t dig a grave, so they cover it with leaves. When Probationary Constable Mick Goodenough tracks down his missing Alsatian cross, he feels sickened, but from the mutilations he can see it immediately for what it is, and takes careful note.

His rank of Probationary Constable belies his knowledge and experience as a former Detective Sergeant with Homicide in the city, and Mick recognises the makings of a psychopath when he sees them. His sergeant at Moorabool Police Station, Jeff Bradley is quite comfortable in his niche and isn’t going to let a blow-in from Sydney tell him how and what to investigate: this is 1966 and that fancy new psychological rubbish has no place in his rural New England town.

Twelve-year-old Hal Humphries, Evan and his mum are new in town; dad’s going to be on the road out west with his sales supervisor job, but one of his colleagues at Prime Foods is keeping an eye in the Humphries family. But that doesn’t prevent the crank calls they’re getting: someone whistling, heavy breathing and saying disturbing things. Mum is upset, especially when there seems to be a prowler near the house at night, but Sergeant Bradley is dismissive….

Mick Goodenough is concerned, though, even more so when the harassment steps up and another mutilated animal is involved. And if he can’t get Bradley to take it seriously, he’ll just have to do it himself, in between the time-wasting chores his boss earmarks for his attention.

Australian rural crime fiction is becoming a very popular genre, and this one is a gem. Woodland easily captures the setting and era: the bush, the heat and the flies are almost palpable; the indolence of the long school holidays in the Australian summer, when childrearing was the polar opposite of helicopter parents and kids roamed free, will strike a cheery chord with many; the time when beer was the refreshment of choice, even at the police station, and when racism was blatant, is less likely to induce nostalgia.

Woodland gives the reader a plot that brims with tension and malice; red herrings and distractions have the reader flitting between likely perpetrators until the pennies finally drop and the story races headlong into a nail-biting climax. His characters are likeable or despicable as required; bespectacled, underestimated Hal and quietly intelligent Mick make a great team. This is an excellent debut novel from an author to watch, and more of Mick Goodenough will be most welcome. Highly recommended! This unbiased review is from an uncorrected proof copy provided by NetGalley and Text Publishing