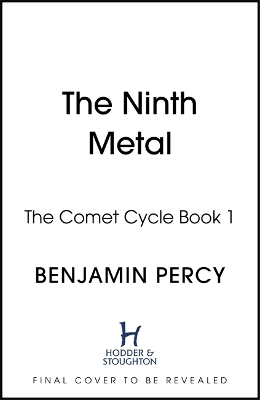 'Great characters, fine writing, totally engrossing' STEPHEN KING It might have been the end of days. Instead it was the beginning of something shockingly new. They called the comet Cain, after the astronomer who discovered it. It passed 500,000 miles from Earth. We were spared planetary destruction and granted a light show like no other. But, one year later, Earth span into the debris field left by the comet and a meteor storm struck. Roads, buildings and even a small town were annihilated.The meteors impacted heavily around the dying mining town of Northfall, Minnesota. It was the night of a mysterious double murder, the deed overshadowed by the discovery that the burning remains of the rock contained an unknown substance more precious than gold: the Ninth Metal. And with that discovery, everything changed.Benjamin Percy is an award-winning novelist, celebrated comic books writer and author of the Wolverine podcast. The Ninth Metal is the first of a cycle of novels set in a shared universe.Praise for The Ninth Metal:'Whether you choose to think of him as the Elmore Leonard of rural Minnesota or the Stephen King of Science Fiction, Percy - with his extraordinary and unrelenting eye - dishes up humanity like some kind of otherworldly blue plate special, at once deeply familiar and wildly new' Margaret Stohl, No. 1 New York Times Bestselling Author'Take one part dystopia, one part sci-fi, two parts apocalypse, then ride them roughshod through a bleak and bloody western, and it still wouldn't get close to what Ben Percy does here, which is blow open the core of humanity's dark heart' Marlon James, Booker Prize winning author of Black Leopard, Red Wolf'The Ninth Metal continues his streak of thrilling, incisive genre bending goodness. It's a sci-fi novel, a crime novel and a super-hero novel, too. Audacious and intelligent and exactly what I was dying to read' Victor LaValle, author of The Changeling

» Have you read this book? We'd like to know what you think about it - write a review about The Ninth Metal: The Comet Cycle Book 1 book by Benjamin Percy and you'll earn 50c in Boomerang Bucks loyalty dollars (you must be a Boomerang Books Account Holder - it's free to sign up and there are great benefits!)


A Preview for this title is currently not available.
More Books By Benjamin Percy
View All