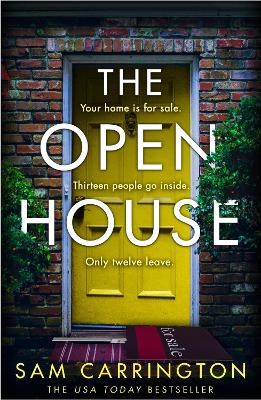 'Lacing everyday life with menace is Sam Carrington's greatest strength as a storyteller.' The Times

Everyone's welcome. But not everyone leaves... Nick and Amber Miller are splitting up and selling their Devon family home. But despite the desirable location, the house isn't moving. Not a single viewing so far.

When their estate agent suggests an open house event, Amber agrees, even as she worries about their gossiping neighbours attending and snooping around their home.

But Amber has more to worry about than nosy neighbours. Because thirteen people enter her house that afternoon, and only twelve leave.

Someone doesn't want the house to sell, and is willing to do anything to stop it...

What readers are saying about The Open House...

'Well I certainly will not be planning any open houses in my future... A truly gripping, spine-chilling, compelling read that was a definite page-turner with it's shocking twists and turns and cleverly-written story. HIGHLY recommend this one!'

'If you are looking for a creepy, fast-paced thriller, enter The Open House!'

'Read this if you like twisty thrillers, and books that make you double check your door is locked at night!!!'

'This book has the paranoia and unreliability of The Woman in the Window and the suburban, gossipy fun of a Liane Moriarty novel. I can't recommend this thriller enough!'

'Wow, Sam Carrington, you really went to the park with this one. It's honestly not something I would even have thought of and the suspense was killing me - I didn't want to put this book down!'

'An addictive page-turner! Psychological suspense at its best!'

» Have you read this book? We'd like to know what you think about it - write a review about The Open House book by Sam Carrington and you'll earn 50c in Boomerang Bucks loyalty dollars (you must be a Boomerang Books Account Holder - it's free to sign up and there are great benefits!)

The Open House is, for the most part a slow-burn psychological thriller which brought to mind spooky classics such as Henry James's The Turn of the Screw. The book is based on a stimulating premise - thirteen prospective buyers enter an open home for viewing, but only twelve are observed leaving. Who is the thirteenth person, and where have they gone? The central character, Amber Miller, from whose perspective the majority of the chapters are narrated, has split from her police officer husband, Nick, and they are in the process of selling the family home, so that both can move on with their lives. The complication is that the home in question previously belonged to Nick's rather overbearing mother, Barb, and was his family home growing up. Barb, from whose perspective the majority of remaining chapters are related, is desperate to prevent the sale of the house and stop Amber and her grandchildren moving away. Are her motives purely nostalgic and solely motivated by a desire to keep the family together? To what lengths might she be prepared to go, in order to keep Amber and the kids in Devon? Add in a dodgy real estate agent, a nosy neighbour and mysterious sounds in the night and Amber is fast becoming a nervous wreck, second-guessing her conviction that there is someone hiding in her house and machinations going on that she can't quite put her finger on. The character development and slow-burn plotting are excellent over the first three-quarters of the novel, the reader developing an understanding for the courageous but self-doubting Amber. However, after the point at which Amber finally starts to uncover the truth - which hits jarringly suddenly - it felt almost as though the author was in a hurry to tie off all the plot threads and bring the book to a tidy conclusion. It's a complex and macabre outcome, foreshadowed to some degree over the course of the build-up, but not entirely satisfying, to my mind. Without wishing to include spoilers, the actions and explanations of various protagonists didn't strike me as particularly realistic, or as consistent with their characters as built up over the preceding narrative. That said, I feel The Open House shows great promise, and I look forward to future excursions in the genre by author Sam Carrington. My thanks to the author, publisher Avon Books UK and Netgalley for the opportunity to read and review this title.

A Preview for this title is currently not available.
More Books By Sam Carrington
View All