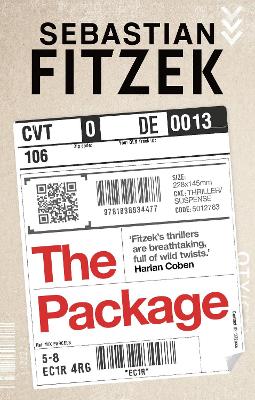 Description - The Package by Sebastian Fitzek

You live in a quiet neighbourhood. You know that he will never find you here. All you've done is taken in a parcel for a neighbour. You have no idea what you've let into your home.

Emma's the one that got away.

The only survivor of a killer known in the tabloids as 'the hairdresser' - because of the trophies he takes from his victims.

Or she thinks she was.

The police aren't convinced. Nor is her husband. She never even saw her tormentor properly, but now she recognises him in every man.

Questioning her sanity, she gives up her job as a doctor in the local hospital and retreats from the world. It is better to stay at home. Quiet. Anonymous. Safe. No one can hurt her here.

And all she did was take a parcel for a neighbour.

She has no idea what she's let into her home.

'Sebastian Fitzek is without question one of the crime world's most evocative storytellers. He always serves up an intense, impossible to put down thriller and The Package is no exception. A gripping read with a surprising twist, this one is not to be missed'

'Sebastian Fitzek is simply amazing. I truly hope that one day I will be able to create suspense and plot twists in the way only Sebastian can. A true Master of his craft'

Sebastian Fitzek is Germany's most successful author. His books have sold 13 million copies, been translated into more than thirty-six languages and are the basis for international cinema and theatre adaptations. Sebastian Fitzek was the first German author to be awarded the European Prize for Criminal Literature. He lives with his family in Berlin.


Other Editions - The Package by Sebastian Fitzek » Have you read this book? We'd like to know what you think about it - write a review about The Package book by Sebastian Fitzek and you'll earn 50c in Boomerang Bucks loyalty dollars (you must be a Boomerang Books Account Holder - it's free to sign up and there are great benefits!)