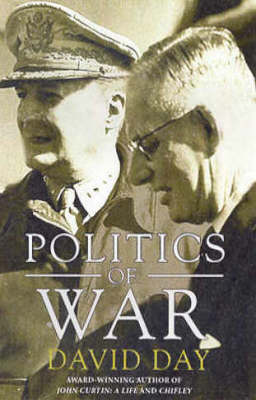 The Politics of War

Description - The Politics of War by David A Day

the first-ever collection of David Day s groundbreaking Second World War histories - the Great Betrayal and Reluctant Nation. the fall of Singapore in February 1942 confronted Australia with its worst nightmare - the possibility of invasion by Japan. With Australia s fighting strength scattered across the globe defending British interests in the Mediterranean and elsewhere, the nation looked to Britain for help. But it was not forthcoming. Instead, with Australia's northern towns being pounded by Japanese bombers, the country was forced to look to the US to help fend off the looming danger. So began the most terrifying period in Australian history, culminating in the naval battle of the Coral Sea and the battle of the Kokoda track. Only then did the risk of invasion recede. As the battles raged, the politicians in Canberra and London, led by John Curtin and Winston Churchill, bickered over the disposition of the troops and the provision of munitions. these diplomatic battles were fought almost as furiously as the battles on the ground between the soldiers of the opposing armies. Based on his original publications of the Great Betrayal and Reluctant Nation plus extensive new research in the archives of Britain and Australia, and utilising a very readable narrative style, the award-winning author of John Curtin: A Life places the landmark battles of Allied forces within their wider political context. the book exposes the awful peril in which Australia was placed by the war in the Pacific and shows how Australia's relationship with Britain was tested almost to breaking point.

Buy The Politics of War by David A Day from Australia's Online Independent Bookstore, Boomerang Books.

Other Editions - The Politics of War by David A Day 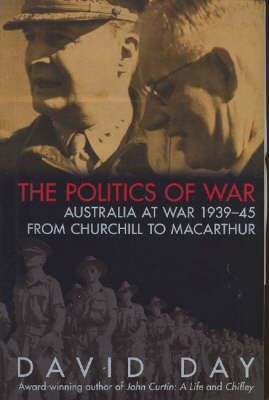 Book Reviews - The Politics of War by David A Day

» Have you read this book? We'd like to know what you think about it - write a review about The Politics of War book by David A Day and you'll earn 50c in Boomerang Bucks loyalty dollars (you must be a Boomerang Books Account Holder - it's free to sign up and there are great benefits!)