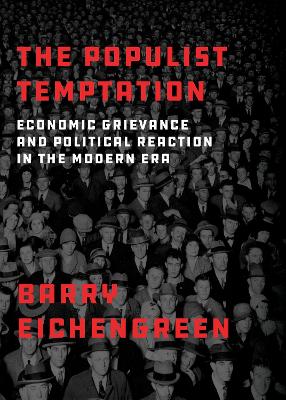 The Populist Temptation: Economic Grievance and Political Reaction in the Modern Era

Description - The Populist Temptation: Economic Grievance and Political Reaction in the Modern Era by Barry Eichengreen

Populism, on both the right and the left, has spread like wildfire throughout Europe and the United States and is making inroads in other parts of the world. In simplest terms, populism is a political ideology that vilifies elites, minorities and foreigners while lionizing "the people." It reached its apogee in the U.S. with the election of Donald Trump but has been a force in Europe since the Great Recession and the refugee crisis. We now see the rise of leaders
with populist tendencies everywhere from Brazil to Turkey.In The Populist Temptation, Barry Eichengreen places this global resurgence of populism in its historical context.
Populists have always thrived, he observes, in times of poor economic performance. Populism feeds on rising inequality, which augments the ranks of those left behind and fans dissatisfaction with the economic status quo. It responds to rapid economic change that heightens insecurity. These economic developments, Eichengreen shows, give rise to populist reactions when they highlight the divergent interests of the people and the elite. Banking and financial crises are a
case in point: the financiers who are the precipitating agents of such crises are card-carrying members of the elite, and are seen as profiting at the expense of the people.But
populism is also a protest against the declining influence of the traditions, beliefs and community of once-dominant groups. It is a reaction against the challenge posed by immigrants and minorities to the people as a homogeneous, well-defined entity. Populists capitalizing on these feelings appeal to a glorious, mythologized past grounded in the collective traditions of that once-dominant majority. They invoke nationalism and criticize politicians who embrace diversity, open borders and equal
rights. Populism has particular appeal, Eichengreen shows, when these identity politics and economic grievances come together.There is no magic solution to these concerns, but
Eichengreen points to a starting place: strengthening welfare state policies that make for greater equality of opportunity and social cohesion. Comparing Europe with the United States, he shows that America's patchwork welfare state is less well equipped to deal with the fallout from globalization and technical change and the growing distance between social groups. This reality will be hard to change, since America's limited welfare state reflects the country's historically-rooted suspicion of
big government. It is therefore in the United States, Eichengreen concludes, where the siren song of populism is most alluring--and dangerous.

Other Editions - The Populist Temptation: Economic Grievance and Political Reaction in the Modern Era by Barry Eichengreen 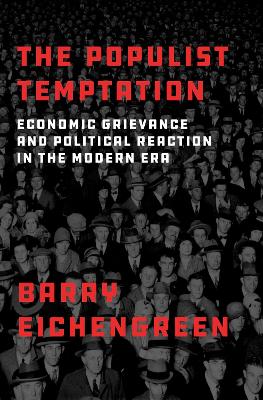 » Have you read this book? We'd like to know what you think about it - write a review about The Populist Temptation: Economic Grievance and Political Reaction in the Modern Era book by Barry Eichengreen and you'll earn 50c in Boomerang Bucks loyalty dollars (you must be a Boomerang Books Account Holder - it's free to sign up and there are great benefits!)