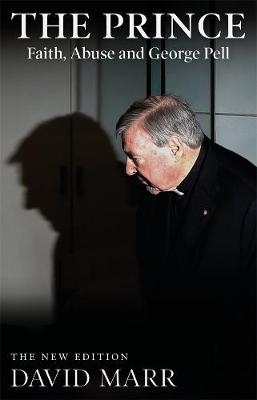 In March this year, the nation's most powerful Catholic, Cardinal George Pell, was jailed for child sexual assault. his appeal failed- the man once in charge of the Vatican's finances would remain behind bars.

In The Prince, David Marr investigates Pell's career and his ultimate fall. Marr reveals a cleric at ease with power and aggressive in asserting the prerogatives of the Vatican. He charts Pell's response - as a man, a priest, an archbishop and a prince of the church - to the scandal that has engulfed the Catholic world- the sexual abuse of children.

This is the story of a cleric torn by the contest between his church and its victims, and slow to realise that the Catholic Church cannot, in the end, escape secular scrutiny. Behind it all was Pell's own terrible secret, which was uncovered and judged in a trial that convulsed the nation.

The Prince is a portrait of hypocrisy and ambition, set against a backdrop of terrible suffering and an ancient institution in turmoil.

» Have you read this book? We'd like to know what you think about it - write a review about The Prince: Faith, Abuse and George Pell (updated edition) book by David Marr and you'll earn 50c in Boomerang Bucks loyalty dollars (you must be a Boomerang Books Account Holder - it's free to sign up and there are great benefits!)


A Preview for this title is currently not available.
More Books By David Marr
View All