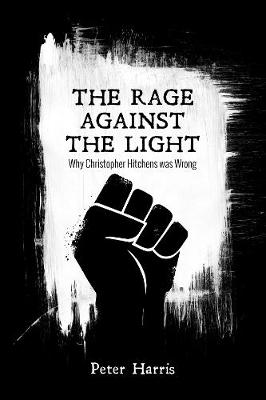 The Rage Against the Light

Description - The Rage Against the Light by Peter Harris

Christopher Hitchens was the most eloquent of the New Atheists. With great rhetorical polish and an encyclopedic mind for historical facts and literary quotations, he presents the case of anti-theism very effectively. Though now deceased, Hitchens' arguments continue to reverberate through his best-selling books and online presence. God, asserts Hitchens, would be, if he existed, the greatest of dictators. Religion, according to Hitchens, is morally bankrupt and madly irrational. The world is better off without them! But is this true? It is the purpose of this book to identify Hitchens' worldview in order to subject it to a critique that will powerfully expose its many flaws. Rather than a dictator, God will be shown to be a God of love. Christianity too will be revealed as a faith that ought to resist tyranny, provides the best foundation for intrinsic human value, and is a rational belief-system. In so doing, this book appeals to all who have been influenced or convinced by Hitchens' arguments to reconsider their position and refuse to rage against the light. ""Christopher Hitchens was easily the most interesting, likeable, and rhetorically eloquent member of the New Atheist movement. But he wasn't the most logically consistent. Peter Harris's comprehensive critique of Hitchens's anti-religious thought utterly devastates the famous atheist's arguments while also recognizing the humanity that made him a friend, not a foe, of the Christians he debated."" --Justin Brierley, author of Unbelievable? Why, After Ten Years of Talking with Atheists, I'm Still a Christian ""In The Rage Against the Light Peter Harris has given us not only a detailed critique of Christopher Hitchens's 'anti-theism' and 'anti-religionism' but an overview of New Atheism and its impact on contemporary philosophical and theological thought. For anyone who has been persuaded that God is a distant, tyrannical figure, whose commandments are impossible and is unfair in his judgements then this book will provide many satisfying counter arguments and encouraging answers."" --David Webster, Director of Eastgate Church, author of Your Royal Identity ""No list of atheist literature from recent history would be complete without mentioning Christopher Hitchens. His rhetoric and irreverent mockery of religion were so clever that even religious listeners could not help but appreciate his wit. As the dust has settled, a concise analysis of the man's work, from a scholarly perspective, was greatly needed. Peter Harris has offered exactly that. This book should be required reading for the religious and the irreligious when thoughtful consideration of Christopher Hitchens is in view."" --Braxton Hunter, President of Trinity College and Seminary, author of Evangelistic Apologetics Peter Harris teaches English at a high school and is completing a PhD in the history of the First World War.

Buy The Rage Against the Light by Peter Harris from Australia's Online Independent Bookstore, Boomerang Books.

Other Editions - The Rage Against the Light by Peter Harris Book Reviews - The Rage Against the Light by Peter Harris

» Have you read this book? We'd like to know what you think about it - write a review about The Rage Against the Light book by Peter Harris and you'll earn 50c in Boomerang Bucks loyalty dollars (you must be a Boomerang Books Account Holder - it's free to sign up and there are great benefits!)


A Preview for this title is currently not available.
More Books By Peter Harris
View All

Accounting and Finance for the International Hospitality Industry
$311.85 $315.00