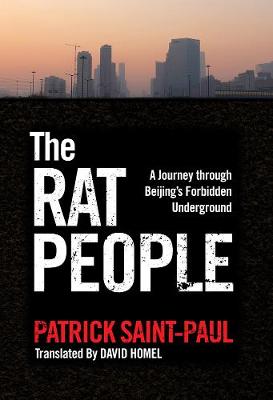 The Rat People: A Journey through Beijing's Forbidden Underground

Description - The Rat People: A Journey through Beijing's Forbidden Underground by Patrick Saint-Paul

In a relatively short amount of time, China has become the second largest economy in the world and is soon poised to overtake the US. In 1978, when China introduced its economic reforms, its GDP was $214 billion; in 2019, it is estimated to increase to $14 trillion. But the country's rapid growth was achieved on the backs and shoulders of its workforce, many of whom were peasant farmers turned into the mingong, urban migrant workers, celebrated by Mao and credited with helping China achieve its economic miracle. Now, a million of them and their descendants live underground in Beijing under inhuman conditions, where there is no light or water and little sanitation.

Author Patrick Saint-Paul spent two years living among the 'rat people' (shizu) of Beijing, in a network of deep tunnels and 20,000 former bomb shelters built during the Cold War. The mingong come to Beijing from all parts of the country, in search of jobs and a better life, but they are unable to afford their own homes on their meager salaries. For them, China's dream of prosperity for all is a bitter fallacy.

In The Rat People, Saint-Paul brings the individual stories of the shizu to life, creating a shocking cautionary tale about the lengths to which people will go in search of a better life, and the human cost paid in service to the modern economy.

» Have you read this book? We'd like to know what you think about it - write a review about The Rat People: A Journey through Beijing's Forbidden Underground book by Patrick Saint-Paul and you'll earn 50c in Boomerang Bucks loyalty dollars (you must be a Boomerang Books Account Holder - it's free to sign up and there are great benefits!)