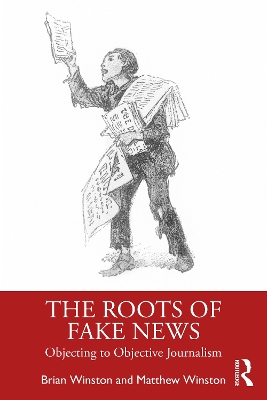 The Roots of Fake News: Objecting to Objective Journalism

Description - The Roots of Fake News: Objecting to Objective Journalism by Brian Winston

The Roots of Fake News argues that 'fake news' is not a problem caused by the power of the internet, or by the failure of good journalism to assert itself. Rather, it is within the news's ideological foundations - professionalism, neutrality, and most especially objectivity - that the true roots of the current 'crisis' are to be found.

Placing the concept of media objectivity in a fuller historical context, this book examines how current perceptions of a crisis in journalism actually fit within a long history of the ways news media have avoided, obscured, or simply ignored the difficulties involved in promising objectivity, let alone 'truth'. The book examines journalism's relationships with other spheres of human endeavour (science, law, philosophy) concerned with the pursuit of objective truth, to argue that the rising tide of 'fake news' is not an attack on the traditional ideologies which have supported journalism. Rather, it is an inevitable result of their inherent flaws and vulnerabilities.

This is a valuable resource for students and scholars of journalism and history alike who are interested in understanding the historical roots, and philosophical context of a fiercely contemporary issue.

Other Editions - The Roots of Fake News: Objecting to Objective Journalism by Brian Winston » Have you read this book? We'd like to know what you think about it - write a review about The Roots of Fake News: Objecting to Objective Journalism book by Brian Winston and you'll earn 50c in Boomerang Bucks loyalty dollars (you must be a Boomerang Books Account Holder - it's free to sign up and there are great benefits!)


A Preview for this title is currently not available.
More Books By Brian Winston
View All