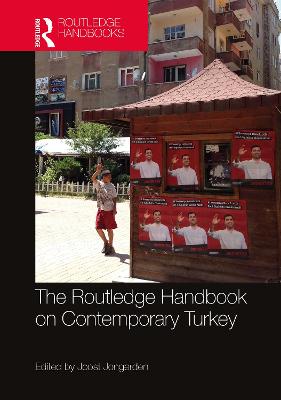 The Routledge Handbook on Contemporary Turkey

Description - The Routledge Handbook on Contemporary Turkey by Joost Jongerden

This Handbook discusses the new political and social realities in Turkey from a range of perspectives, emphasizing both changes as well as continuities. Contextualizing recent developments, the chapters, written by experts in their fields, combine analytical depth with a broad overview.

In the last few years alone, Turkey has experienced a failed coup attempt; a prolonged state of emergency; the development of a presidential system based on the supreme power of the head of state; a crackdown on traditional and new media, universities and civil society organizations; the detention of journalists, mayors and members of parliament; the establishment of political tutelage over the judiciary; and a staggering economic crisis. It has also terminated talks with the Kurdistan Workers Party (PKK); intervened in and occupied mountainous border areas in northern Iraq to fight that organization; occupied Afrin and strips of territory in northern Syria; intervened in Libya; articulated an assertive transnational politics toward "kin" across the world; strained its relations with the European Union and the US, while developing relations with Russia; flirted with China's intercontinental Belt and Road Initiative; and carved out a presence in Africa, to name just a few of the most recent developments.

This volume provides a comprehensive and wide-ranging overview of the making of modern Turkey. It is a key reference for students and scholars interested in political economy, security studies, international relations and Turkish studies.

» Have you read this book? We'd like to know what you think about it - write a review about The Routledge Handbook on Contemporary Turkey book by Joost Jongerden and you'll earn 50c in Boomerang Bucks loyalty dollars (you must be a Boomerang Books Account Holder - it's free to sign up and there are great benefits!)


A Preview for this title is currently not available.
More Books By Joost Jongerden
View All