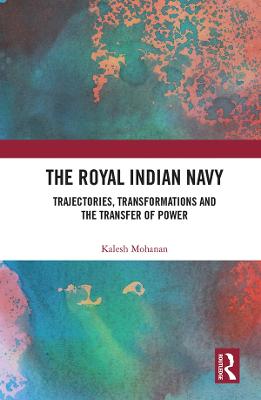 The Royal Indian Navy: Trajectories, Transformations and the Transfer of Power

Description - The Royal Indian Navy: Trajectories, Transformations and the Transfer of Power by Kalesh Mohanan

This book presents a comprehensive history of the Royal Indian Navy (RIN). It traces the origins of the RIN to the East India Company, as early as 1612, and untangles the institution's complex history. Capturing various transitional phases of the RIN, especially during the crucial period of 1920-1950, it concludes with the final transfer of the RIN from under the British Raj to independent India.

Drawn from a host of primary sources-personal diaries and logs, official reports and documents-the author presents a previously unexplored history of colonial and imperial defence policy, and the contribution of the RIN during the World Wars. This book explores several aspects in RIN's history such as its involvement in the First World War; its status in policies of the British Raj; the martial race theory in the RIN; and the development of the RIN from a non-combat force to a full-fledged combat defence force during the Second World War. It also studies the hitherto unexplored causes, nature and impact of the 1946 RIN Revolt on the eve of India's independence from a fresh perspective.

An important intervention in the study of military and defence history, this will be an essential read for students, researchers, defence personnel, military academy cadets, as well as general readers.

Book Reviews - The Royal Indian Navy: Trajectories, Transformations and the Transfer of Power by Kalesh Mohanan

» Have you read this book? We'd like to know what you think about it - write a review about The Royal Indian Navy: Trajectories, Transformations and the Transfer of Power book by Kalesh Mohanan and you'll earn 50c in Boomerang Bucks loyalty dollars (you must be a Boomerang Books Account Holder - it's free to sign up and there are great benefits!)