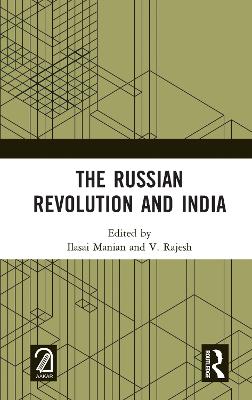 The Russian Revolution and India

Description - The Russian Revolution and India by Ilasai Manian

The October Revolution undoubtedly produced a radicalising effect on the Indian situation from the very beginning. At the end of World War I, India was astir with workers' strikes and massive demonstrations against British repression. Peasant unrest was also growing. It was this awakened India, entering the mass phase of its fight for independence, which looked to the Russian Revolution and to its leader Lenin for inspiration and help.They further saw that Lenin and other leaders of Soviet Russia stood for a new social order in which exploitation of man by man is ended, an order based on brotherhood, equality and cooperation of men, and had established a society in which the working class and the toiling people had come into their own and taken over the reins of administration to build socialism.

This volume contains several articles and essays concerning the Indian national movement and the support extended by Russia. In particular,the essays related to the lives of the expatriate Indian revolutionaries in Europe and the meeting of Indian revolutionaries with Lenin are of interest in this volume. The views of Indian national leaders like M.K. Gandhi, Jawaharlal Nehru, B.G. Tilak among others on Russian Revolution are also included. In short, this volume will be useful to understand the support extended by Russia to the Indian national movement during the first half of the twentieth century.

Book Reviews - The Russian Revolution and India by Ilasai Manian

» Have you read this book? We'd like to know what you think about it - write a review about The Russian Revolution and India book by Ilasai Manian and you'll earn 50c in Boomerang Bucks loyalty dollars (you must be a Boomerang Books Account Holder - it's free to sign up and there are great benefits!)