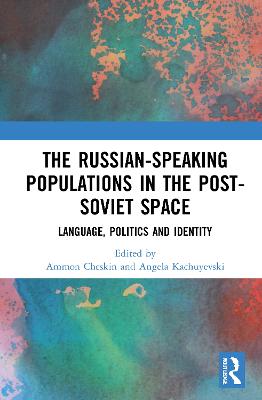 The Russian-speaking Populations in the Post-Soviet Space: Language, Politics and Identity

Description - The Russian-speaking Populations in the Post-Soviet Space: Language, Politics and Identity by Ammon Cheskin

In the wake of Russia's annexation of Crimea, this volume examines the relationship Russia has with its so-called 'compatriots abroad'. Based on research from Belarus, Estonia, Kazakhstan, Latvia and Ukraine, the authors examine complex relationships between these individuals, their home states, and the Russian Federation.

Russia stands out globally as a leading sponsor of kin-state nationalism, vociferously claiming to defend the interests of its so-called diaspora, especially the tens of millions of ethnic Russians and Russian speakers who reside in the countries that were once part of the Soviet Union. However, this volume shifts focus away from the assertive diaspora politics of the Russian state, towards the actual groups of Russian speakers in the post-Soviet space themselves. In a series of empirically grounded studies, the authors examine complex relationships between 'Russians', their home-states and the Russian Federation. Using evidence from Belarus, Estonia, Kazakhstan, Latvia, and Ukraine, the findings demonstrate multifaceted levels of belonging and estrangement with spaces associated with Russia and the new, independent states in which Russian speakers live. By focusing on language, media, politics, identity and quotidian interactions, this collection provides a wealth of material to help understand contemporary kin-state policies and their impact on group identities and behaviour.

The chapters in this book were originally published as a special issue of Europe-Asia Studies.

Book Reviews - The Russian-speaking Populations in the Post-Soviet Space: Language, Politics and Identity by Ammon Cheskin

» Have you read this book? We'd like to know what you think about it - write a review about The Russian-speaking Populations in the Post-Soviet Space: Language, Politics and Identity book by Ammon Cheskin and you'll earn 50c in Boomerang Bucks loyalty dollars (you must be a Boomerang Books Account Holder - it's free to sign up and there are great benefits!)


A Preview for this title is currently not available.
More Books By Ammon Cheskin
View All