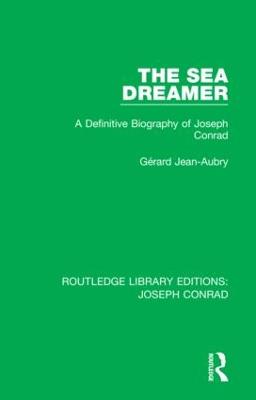 The Sea Dreamer: A Definitive Biography of Joseph Conrad

Description - The Sea Dreamer: A Definitive Biography of Joseph Conrad by Gerard Jean-Aubry

Of Joseph Conrad, H.L. Mencken has written: 'There was something almost suggesting the vastness of a natural phenomenon. He transcended all the rules. There have been perhaps, greater novelists, but I believe that he was incomparably the greatest artist whoever wrote a novel.'

Originally published in 1957, the year of the centenary of Conrad's birth, and although he was firmly established among the world's great literary figures, little was known about him generally, beyond the fact that he was himself once a sailor, and that the language he handled with such mastery was not the one to which he was born. This was described as the definitive biography, written by one of Conrad's closest friends, to whom the novelist willed his personal papers. It took many years to prepare and the author travelled extensively in the lands that Conrad knew and wrote about. He writes with clarity, compassion and understanding of Conrad's childhood in Russia (where the father was exiled for Polish nationalist activities); of how the youth of fifteen, who had never seen the sea before, became a sailor; of how at twenty-nine he became a British subject and master of his own ship; of how in 1894 he became a novelist almost by accident, rose rapidly to literary fame, found new friends and established himself in literary history.

This is a record of the strangest and most enigmatic of lives, fascinating and authoritative at the same time.

» Have you read this book? We'd like to know what you think about it - write a review about The Sea Dreamer: A Definitive Biography of Joseph Conrad book by Gerard Jean-Aubry and you'll earn 50c in Boomerang Bucks loyalty dollars (you must be a Boomerang Books Account Holder - it's free to sign up and there are great benefits!)