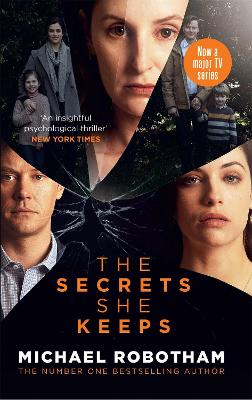 The Secrets She Keeps: Now a major TV series

Description - The Secrets She Keeps: Now a major TV series by Michael Robotham

The Secrets She Keeps is now a major TV series on Network Ten starring Laura Carmichael (Downton Abbey), Jessica De Gouw (The Crown), and Michael Dorman (Patriot)Everyone has an idea of what their perfect life is. For Agatha, it's Meghan Shaughnessy's ...These two women from vastly different backgrounds have one thing in common - a dangerous secret that could destroy everything they hold dear. Both will risk everything to hide the truth, but their worlds are about to collide in a shocking act that cannot be undone.A compelling psychological thriller that delves deeply into the psyche of the human mind, by internationally bestselling author Michael Robotham.WINNER FICTION BOOK OF THE YEAR, ABIA AWARDS 2018'A book you won't be able to put down, although you may occasionally want to hide your eyes.' - STEPHEN KING'Each woman reveals her tale in riveting alternating chapters that merge into a series of chilling twists.' - People Magazine

» Have you read this book? We'd like to know what you think about it - write a review about The Secrets She Keeps: Now a major TV series book by Michael Robotham and you'll earn 50c in Boomerang Bucks loyalty dollars (you must be a Boomerang Books Account Holder - it's free to sign up and there are great benefits!)