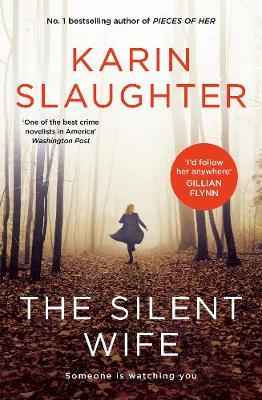 From the No.1 bestselling author comes a gripping new crime thriller featuring WILL TRENT and SARA LINTON.

A woman runs alone in the woods. She convinces herself she has no reason to be afraid, but she's wrong. A predator is stalking the women of Grant County. He lingers in the shadows, until the time is just right to snatch his victim.

A decade later, the case has been closed. The killer is behind bars. But then another young woman is brutally attacked and left for dead, and the MO is identical.

Although the original trail has gone cold - memories have faded, witnesses have disappeared - agent Will Trent and forensic pathologist Sara Linton must re-open the cold case. But the clock is ticking, and the killer is determined to find his perfect silent wife ...

'Fiction doesn't get any better than this' Jeffrey Deaver

'In a class of her own' West Australian

Other Editions - The Silent Wife by Karin Slaughter » Have you read this book? We'd like to know what you think about it - write a review about The Silent Wife book by Karin Slaughter and you'll earn 50c in Boomerang Bucks loyalty dollars (you must be a Boomerang Books Account Holder - it's free to sign up and there are great benefits!)

5 stars The Silent Wife is the tenth book in the Will Trent series by best-selling American author, Karin Slaughter. The aftermath of a prison riot sees GBI Special Agents Faith Mitchell and Will Trent offered information by an inmate in exchange for the reopening of a cold case. Jailed eight years earlier as a paedophile, Daryl Nesbitt is determined to expose the corrupt police whose (illegal?) search sent him to prison: Grant County cops Lena Adams and Jeffrey Tolliver.

Grant police always believed Nesbitt guilty of the attacks on three women, although he was never tried and the cases remained open. Now, he cites a number of (apparently accidental) deaths after his imprisonment, that fit the profile of those still-unsolved Grant County attacks. Is Nesbitt simply an opportunist, or is there substance to his accusations? If he’s not guilty, has there been a serial killer out there for eight years?

GBI deputy director, Amanda Wagner decides to act cautiously: with Jeffrey Tolliver dead, Faith and Will go to see an uncooperative Lena Adams, to try (and fail) to obtain her notebooks covering those cases; Dr Sara Linton, now a GBI pathologist, checks the body of the most recent victim to which Nesbitt has drawn attention. That body does indeed bear the same signs; the source of Nesbitt’s information turns out to be a surprise; and further investigation leads the GBI to understand this is far from being a cold case.

The narrative is from multiple perspectives, including that of Jeffrey Tolliver eight years previous, and a prospective victim; in both past and present timeframes, it takes place over just a few days, but Slaughter manages to fill those days with plenty of tension, action and a gripping climax. And each time the situation gets a little too tense, Slaughter inserts Faith Mitchell with her inane but often blackly funny chatter.

In Lena Adams, Slaughter once again, gives us the character we love to hate, and does it so well that this time Will and Faith won’t be the only ones itching to use their fists. The disharmony between Will and Sara that follows a certain proposal persists in the background (and sometimes jumps to the foreground) of the main action. And the spectre of Jeffrey doesn’t help things.

Regular readers will know that Slaughter does not shy away from confronting issues, so when she tackles them with explicit examples of murder, rape, assault, stalking, forcible sodomy, mutilation of corpses and necrophilia, no one should be too surprised.

In her author’s note, Slaughter explains the liberties taken with the timeline to satisfy the obsessive reader, but this does contain spoilers so is best read last. Any Karin Slaughter book is going to be hotly anticipated, but a Will and Sara book is always well worth the wait, and this one is a brilliant read.