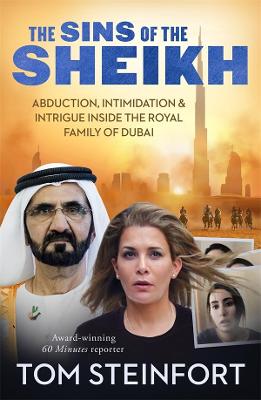 The Sins of the Sheikh: Abduction, Intimidation and Intrigue Inside the Royal House of Dubai

Description - The Sins of the Sheikh: Abduction, Intimidation and Intrigue Inside the Royal House of Dubai by Tom Steinfort

The Sins of the Sheikh tells the dark story of abduction, cover-ups, brutality and intimidation within the mysterious royal family of Dubai, ruled by the iron fist of its patriarch, Sheikh Mohammed bin Rashid Al Maktoum.

Dubai is feted internationally as a beacon of modernity- glittering skyscrapers, a cultural melting pot, even a new player in the space race. The city's ruled by Sheikh Mohammed bin Rashid Al Maktoum, an all-powerful multi-billionaire who counts the Queen and Donald Trump as friends. His kingdom's progressive propaganda defies a medieval underbelly. And nowhere is that more apparent than in the Sheikh's own palace, where numerous women have now risked their lives by sounding the alarm about what's really going on in the United Arab Emirates.

Two of the Sheikh's daughters have attempted daring escapes from their father's iron rule, dreaming of a better life. Sheikha Latifa released her own extraordinary tell-all video online, and the Sheikh's youngest wife caused further scandal by laying out the Maktoum dynasty's dirty laundry in London's High Court.

Sheikh Mohammed's attitudes towards women and human rights are reflected across the UAE, despite the country spending a fortune to promote itself as a model of harmony and equality. Here, women are still considered a possession. They are the ones charged if they report a rape. There is no minimum wage for workers. Corruption is commonplace. Censorship and propaganda is rife.

Tom Steinfort has spent years uncovering the sins of Sheikh Mohammed, and the disturbing reality of life in Dubai. Now, he shares the brave stories of those who have experienced the horror first hand, and trusted him to raise the alarm.

Buy The Sins of the Sheikh: Abduction, Intimidation and Intrigue Inside the Royal House of Dubai by Tom Steinfort from Australia's Online Independent Bookstore, Boomerang Books.

Book Reviews - The Sins of the Sheikh: Abduction, Intimidation and Intrigue Inside the Royal House of Dubai by Tom Steinfort

» Have you read this book? We'd like to know what you think about it - write a review about The Sins of the Sheikh: Abduction, Intimidation and Intrigue Inside the Royal House of Dubai book by Tom Steinfort and you'll earn 50c in Boomerang Bucks loyalty dollars (you must be a Boomerang Books Account Holder - it's free to sign up and there are great benefits!)