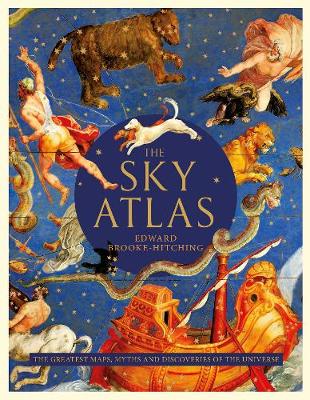 The Sky Atlas: The Greatest Maps, Myths and Discoveries of the Universe

Description - The Sky Atlas: The Greatest Maps, Myths and Discoveries of the Universe by Edward Brooke-Hitching

'Beautiful ... endless, brilliant unforgettable stories' Cerys Matthews, BBC Radio 6
'Combining myth and science, this breathtaking book [is] packed with stunning images' Daily Mail
After the enormous international success of The Phantom Atlas and The Golden Atlas, Edward Brooke-Hitching's brilliant book unveils some of the most beautiful maps and charts ever created during mankind's quest to map the skies above us.

This is the sky as it has never been presented before: the realm of stars and planets, but also of gods, devils, weather wizards, flying sailors, medieval aliens, mythological animals and rampaging spirits. The reader is taken on a tour of star-obsessed cultures around the world, learning about Tibetan sky burials, star-covered Inuit dancing coats, Mongolian astral prophets and Sir William Herschel's 1781 discovery of Uranus, the first planet to be found since antiquity. Even stranger are the forgotten stories from European history, like the English belief of the Middle Ages in ships that sailed a sea above the clouds, 16th-century German UFO sightings and the Edwardian aristocrat who mistakenly mapped alien-made canals on the surface of Mars.

As the intricacies of our universe are today being revealed with unprecedented clarity, there has never been a better time for a highly readable book as beautiful as the night sky to contextualise the scale of these achievements for the general reader.

Buy The Sky Atlas: The Greatest Maps, Myths and Discoveries of the Universe by Edward Brooke-Hitching from Australia's Online Independent Bookstore, Boomerang Books.

Book Reviews - The Sky Atlas: The Greatest Maps, Myths and Discoveries of the Universe by Edward Brooke-Hitching

» Have you read this book? We'd like to know what you think about it - write a review about The Sky Atlas: The Greatest Maps, Myths and Discoveries of the Universe book by Edward Brooke-Hitching and you'll earn 50c in Boomerang Bucks loyalty dollars (you must be a Boomerang Books Account Holder - it's free to sign up and there are great benefits!)