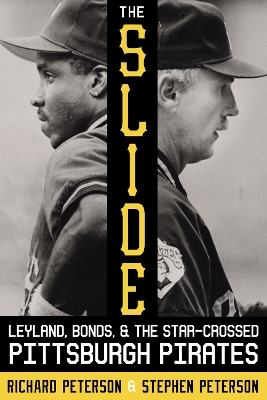 The Slide: Leyland, Bonds, and the Star-Crossed Pittsburgh Pirates

Description - The Slide: Leyland, Bonds, and the Star-Crossed Pittsburgh Pirates by Richard Peterson

In the deciding game of the 1992 National League Championship Series against the Atlanta Braves, the Pittsburgh Pirates suffered the most dramatic and devastating loss in team history when former Pirate Sid Bream slid home with the winning run. Bream's infamous slide ended the last game played by Barry Bonds in a Pirates uniform and sent the franchise reeling into a record twenty-season losing streak. The Slide tells the story of the myriad events, beginning with the aftermath of the 1979 World Series, which led to the fated 1992 championship game and beyond. It describes the city's near loss of the team in 1985 and the major influence of Syd Thrift and Jim Leyland in developing a dysfunctional team into a division champion. The book gives detailed accounts of the 1990, 1991, and 1992 division championship seasons, the critical role played by Kevin McClatchy in saving the franchise in 1996, and summarizes the twenty losing seasons before the Pirates finally broke the curse of "the slide" in 2013, with their first playoff appearance since 1992.

» Have you read this book? We'd like to know what you think about it - write a review about The Slide: Leyland, Bonds, and the Star-Crossed Pittsburgh Pirates book by Richard Peterson and you'll earn 50c in Boomerang Bucks loyalty dollars (you must be a Boomerang Books Account Holder - it's free to sign up and there are great benefits!)


A Preview for this title is currently not available.
More Books By Richard Peterson
View All

Conversations In The Rainforest: Culture, Values, And The Environment In Central Africa
$239.58 $242.00

The Turnpike Rivalry: The Pittsburgh Steelers and the Cleveland Browns
$49.42 $54.91