'My favourite series' Val McDermidDCI Nelson has been receiving threatening letters telling him to 'go to the stone circle and rescue the innocent who is buried there'. He is shaken, not only because children are very much on his mind, with Michelle's baby due to be born, but because although the letters are anonymous, they are somehow familiar. They read like the letters that first drew him into the case of THE CROSSING PLACES, and to Ruth. But the author of those letters is dead. Or are they?Meanwhile Ruth is working on a dig in the Saltmarsh - another henge, known by the archaeologists as the stone circle - trying not to think about the baby. Then bones are found on the site, and identified as those of Margaret Lacey, a twelve-year-old girl who disappeared thirty years ago.As the Margaret Lacey case progresses, more and more aspects of it begin to hark back to that first case of THE CROSSING PLACES, and to Scarlett Henderson, the girl Nelson couldn't save. The past is reaching out for Ruth and Nelson, and its grip is deadly.

Other Editions - The Stone Circle: The Dr Ruth Galloway Mysteries 11 by Elly Griffiths 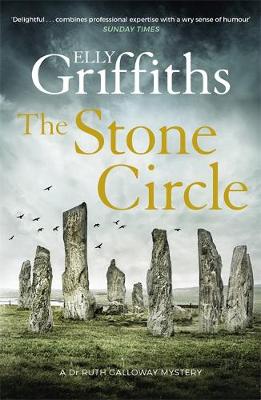 » Have you read this book? We'd like to know what you think about it - write a review about The Stone Circle: The Dr Ruth Galloway Mysteries 11 book by Elly Griffiths and you'll earn 50c in Boomerang Bucks loyalty dollars (you must be a Boomerang Books Account Holder - it's free to sign up and there are great benefits!)

5 stars The Stone Circle is the eleventh book in the Ruth Galloway series by award-winning British author, Elly Griffiths. Nearly a decade ago, DCI Harry Nelson was the recipient of some anonymous letters that hampered his search for two missing girls. The writer of those letters, archaeologist Erik Anderssen, is dead. But now Harry and then Ruth, receive similar letters, exhorting them to “rescue the innocent buried” in the stone circle. Harry believes they have same mocking, erudite, menacing tone, but Ruth feels they are more benign.

Is it a coincidence that Erik’s son, Leif, also an archaeologist, has turned up at the same time? He’s conducting a new dig in the Saltmarsh near where, back then, the body of one of the missing girls was found. Harry doesn’t believe in coincidence. And that dig is exactly where they now find the body of a girl, missing for over thirty years. It’s a cold case that’s going to open up old wounds and raise old suspicions.

Both Ruth and Harry are still distracted by an attraction upon which they cannot act: Nelson has a wife, two adult daughters and now, a new baby boy, so he’s unlikely to jeopardise his marriage; Ruth accepts that but is unable (and perhaps unwilling?) to avoid encounters with the father of her seven-year-old daughter, Kate. Then the murder of a suspect in their cold case has Harry’s team redoubling their efforts without making much headway, when suddenly a missing newborn takes precedence.

Once again, Griffiths gives the reader an intriguing mystery full of twists, misdirections, red herrings and a number of possible suspects to keep the reader guessing right up to the final chapters. The circumstances of each disappearance are described from multiple perspectives by the many people involved, each with subtle differences as they are asked to try to recall any little detail that might not seem important. And it’s one of those little details that provides the critical clue.

Her characters, with all their flaws and quirks, are mostly appealing and easily believable. Ruth’s inner monologue is an utter delight: a little (but not too) self-deprecating, wry, insightful, and occasionally a bit cynical. Her ever-critical sister-in-law has foisted a Fitbit upon her: “Ruth fears that her relationship with the Fitbit is already an unhealthy one. She worries about its good opinion of her (otherwise why not take it off?) but she also resents its chirpy bullying. ‘Almost there! You’ve nailed your step target for the day!’ Never trust anyone, or anything, that uses that many exclamation marks.”

And while our heroine may be wearing a Fitbit, her enthusiasm for exercise has not changed: “Ruth scrapes her windscreen with her gym membership card. It’s the most use it ever gets.” Harry, meanwhile, is still working on getting his political correctness right and those alternative types remain hard to accept: “Nelson always finds it hard to imagine Cathbad sleeping. Somehow he pictures him hanging from the ceiling like a bat.” In this instalment, his paternal instincts have him threatening to kill someone.

This novel reads well as a stand-alone, but there are quite a lot of references to earlier cases and thus spoilers for earlier books if readers are intending to read the series. In particular, this novel refers back to The Crossing Places in detail, so it is advisable to read that one first. Another excellent dose of archaeology-laced Norfolk crime that will have readers eagerly anticipating Ruth’s next outing. Recommended. This unbiased review is from an uncorrected proof copy provided by NetGalley and Houghton Mifflin Harcourt publishers.

The Postscript Murders: a gripping new mystery from the bestselling author of The Stranger Diaries
$27.71 $32.99