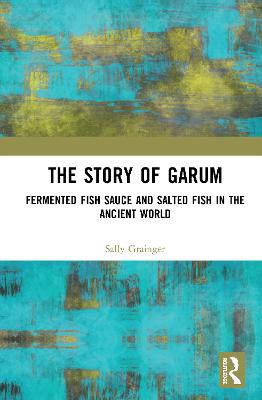 The Story of Garum: Fermented Fish Sauce and Salted Fish in the Ancient World

Description - The Story of Garum: Fermented Fish Sauce and Salted Fish in the Ancient World by Sally Grainger

The Story of Garum recounts the convoluted journey of that notorious Roman fish sauce, known as garum, from a smelly Greek fish paste to an expensive luxury at the heart of Roman cuisine and back to obscurity as the Roman empire declines.

This book is a unique attempt to meld the very disparate disciplines of ancient history, classical literature, archaeology, zooarchaeology, experimental archaeology, ethnographic studies and modern sciences to illuminate this little understood commodity. Currently Roman fish sauce has many identities depending on which discipline engages with it, in what era and at what level. These identities are often contradictory and confused and as yet no one has attempted a holistic approach where fish sauce has been given centre stage. Roman fish sauce, along with oil and wine, formed a triad of commodities which dominated Mediterranean trade and while oil and wine can be understood, fish sauce was until now a mystery.

Students and specialists in the archaeology of ancient Mediterranean trade whether through amphora studies, shipwrecks or zooarchaeology will find this invaluable. Scholars of ancient history and classics wishing to understand the nuances of Roman dining literature and the wider food history discipline will also benefit from this volume.

Book Reviews - The Story of Garum: Fermented Fish Sauce and Salted Fish in the Ancient World by Sally Grainger

» Have you read this book? We'd like to know what you think about it - write a review about The Story of Garum: Fermented Fish Sauce and Salted Fish in the Ancient World book by Sally Grainger and you'll earn 50c in Boomerang Bucks loyalty dollars (you must be a Boomerang Books Account Holder - it's free to sign up and there are great benefits!)


A Preview for this title is currently not available.
More Books By Sally Grainger
View All