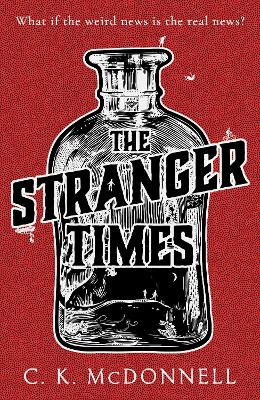 Description - The Stranger Times by C.K.McDonnell

There are Dark Forces at work in our world (and in Manchester in particular) and so thank God The Stranger Times is on hand to report them. A weekly newspaper dedicated to the weird and the wonderful (but more often the weird) of modern life, it is the go-to publication for the unexplained and inexplicable . . .

At least that's their pitch. The reality is rather less auspicious. The editor is a drunken, foul-tempered and -mouthed husk of a man who thinks little (and believes less) of the publication he edits, his staff are a ragtag bunch of misfits, each with their own secrets to hide and axes to grind. And as for the assistant editor . . . well, that job's a revolving door, and it has just revolved to reveal Hannah Willis, who's got her own set of problems.

It's when tragedy strikes in Hannah's first week on the job that The Stranger Times is forced to do some serious, proper, actual investigative journalism. What they discover leads them to a shocking realisation- that some of the stories they'd previously dismissed as nonsense are in fact terrifyingly, gruesomely real. Soon they come face-to-face with darker foes than they could ever have imagined. It's one thing reporting on the unexplained and paranormal but it's quite another being dragged into the battle between the forces of Good and Evil . . .

Other Editions - The Stranger Times by C.K.McDonnell » Have you read this book? We'd like to know what you think about it - write a review about The Stranger Times book by C.K.McDonnell and you'll earn 50c in Boomerang Bucks loyalty dollars (you must be a Boomerang Books Account Holder - it's free to sign up and there are great benefits!)


A Preview for this title is currently not available.
More Books By C.K.McDonnell
View All