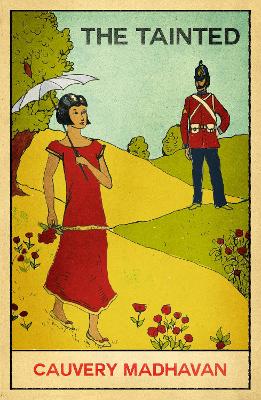 Description - The Tainted by Cauvery Madhavan

It's spring 1920 in the small military town of Nandagiri in southeast India. Colonel Aylmer, commander of the Royal Irish Kildare Rangers, is in charge. A distance away, decently hidden from view, lies the native part of Nandagiri with its heaving bazaar, reeking streets, and brothels. Everyone in Nandagiri knows their place and the part they were born to play--with one exception. The local Anglo-Indians, tainted by their mixed blood, belong nowhere. When news of the Black and Tans' atrocities back in Ireland reaches the troops, even their priest cannot cool the men's hot-headed rage. Politics vie with passion as Private Michael Flaherty pays court to Rose, Mrs. Aylmer's Anglo-Indian maid, but mutiny brings heroism and heartbreak in equal measure. Only the arrival of Colonel Aylmer's grandson Richard, some 60 years later, will set off the reckoning, when those who were parted will be reunited, and those who were lost will be found again.

» Have you read this book? We'd like to know what you think about it - write a review about The Tainted book by Cauvery Madhavan and you'll earn 50c in Boomerang Bucks loyalty dollars (you must be a Boomerang Books Account Holder - it's free to sign up and there are great benefits!)


A Preview for this title is currently not available.
More Books By Cauvery Madhavan
View All