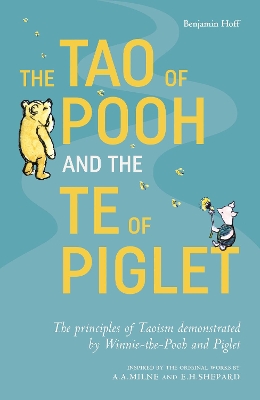 The Tao of Pooh & The Te of Piglet

"It's hard to be brave,' said Piglet, sniffing slightly, "when you're only a Very Small Animal."
Rabbit, who had begun to write very busily, looked up and said: "It is because you are a very small animal that you will be useful in the adventure before us."

Winnie-the-Pooh has a certain way about him, a way of doing things that has made him the world's most beloved bear, and Pooh's Way, as Benjamin Hoff brilliantly demonstrates, seems strangely close to the ancient Chinese principles of Taoism. And as for Piglet, he embodies the very important principle of Te, meaning Virtue of the Small. Benjamin Hoff's explanations of Taoism and Te through Pooh and Piglet show that this is not an ancient and remote philosophy but something that you can use, here and now.

An utterly unique book which makes complex concepts accessible with a little help from Pooh and his friends from the Hundred Acre Wood. Pooh may be a Bear of Very Little Brain but there are lessons to be learned from his approach to life. Beautifully illustrated by E H Shepard.

Buy The Tao of Pooh & The Te of Piglet by Benjamin Hoff from Australia's Online Independent Bookstore, Boomerang Books. » Have you read this book? We'd like to know what you think about it - write a review about The Tao of Pooh & The Te of Piglet book by Benjamin Hoff and you'll earn 50c in Boomerang Bucks loyalty dollars (you must be a Boomerang Books Account Holder - it's free to sign up and there are great benefits!)


A Preview for this title is currently not available.
More Books By Benjamin Hoff
View All