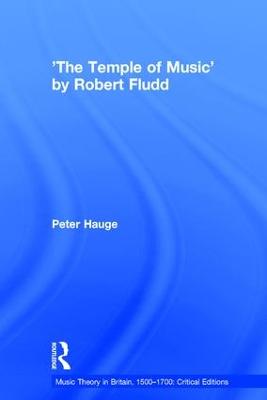 'The Temple of Music' by Robert Fludd

Description - 'The Temple of Music' by Robert Fludd by Peter Hauge

Robert Fludd (1574-1637) is well known among historians of science and philosophy for his intriguing work, The Metaphysical, Physical and Technical History of both Major and Minor Worlds, in which music plays an important role in his system of neoplatonic correspondences: the harmony of the universe (macrocosm) as well as the harmony of man (microcosm). 'The Temple of Music' (1617-18) is one section of this work, and deals with music theory, practice and organology. Many musicologists today have dismissed his musical ideas as conservative and outmoded or mainly based on fantasy; only the chapters on instruments have received some attention. However, reading Fludd's work on music theory and practice in the context of his own time and comparing it with other contemporary treatises, it is apparent that much of it contains highly original ideas and cannot be considered old fashioned or conservative. It is evident that Fludd's music philosophy influenced and provoked contemporary natural philosophers such as Marin Mersenne and Johannes Kepler. Less well known is the fact that Fludd's music theory reveals aspects of the development of new concepts that appear to reflect contemporary writers on music such as John Coprario and Thomas Campion. Before now, 'The Temple of Music' has not been easily accessible or available, and the fact that Fludd wrote in Latin has also been prohibitive. This critical edition provides the original Latin, an English translation and essential illustrations. The book will therefore be a useful tool for understanding the position of English music theory around 1600.

» Have you read this book? We'd like to know what you think about it - write a review about 'The Temple of Music' by Robert Fludd book by Peter Hauge and you'll earn 50c in Boomerang Bucks loyalty dollars (you must be a Boomerang Books Account Holder - it's free to sign up and there are great benefits!)

A Preview for this title is currently not available.
More Books By Peter Hauge
View All