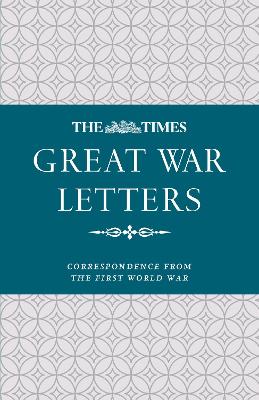 Selection of more than 300 letters published by The Times newspaper between 1914 and 1918, as its readers and the nation alike endured the ordeal of the First World War.

Much of the correspondence relates to the con ict - the news, or absence of news, from the trenches and the sacri ces being made on the Home Front. Celebrated politicians and the man on the Clapham omnibus both responded to the horrors of gas and the slaughter on the Somme.

Yet it was at this time, too, that the newspaper's famous letters page began to take on its distinctive nature, nding room for off-beat or humorous topics and writers who held up a mirror to Britain's character and its changing moods.

Among those who wrote to The Times during the war were many of the most notable gures of the era, such as Arthur Conan Doyle, HG Wells, Millicent Fawcett, Edith Wharton, Nancy Astor, Edith Cavell, David Lloyd George and Winston Churchill.

With insights and opinion on diverse subjects such as;
* the Russian Revolution
* Women's suffrage
* the rst Zeppelin raids
* the rearing of guinea fowl for shooting

Great War Letters shines a light on the world of a century ago at the very moment in time that it was about to change forever.

» Have you read this book? We'd like to know what you think about it - write a review about The Times Great War Letters: Correspondence from the First World War book by James Owen and you'll earn 50c in Boomerang Bucks loyalty dollars (you must be a Boomerang Books Account Holder - it's free to sign up and there are great benefits!)

A Preview for this title is currently not available.
More Books By James Owen
View All

Moderation a Virtue: Or, the Occasional Conformist Justify'd from the Imputation of Hypocrisy: Wherein Is Shewn, the Antiquity, Catholick Principles, and Advantage of Occasional Conformity to the Church of England: The Second Ed Corrected
Available, ships in 8-11 days
$39.12 $43.47

A Plea for Scripture Ordination: Or, Ten Arguments from Scripture and Antiquity Proving Ordination by Presbyters Without Bishops to Be Valid by J Owen to Which Is Prefixt an Epistle by the Reverend MR Daniel Williams the Second Ed C
Available, ships in 8-11 days
$54.55 $60.61

Moderation a Virtue: Or, the Occasional Conformist Justify'd from the Imputation of Hypocrisy; Wherein Is Shewn, the Antiquity, Catholick Principles, and Advantage of Occasional Conformity to the Church of England;
Available, ships in 8-11 days
$36.92 $41.02

The History of the Consecration of Altars, Temples and Churches: Shewing the Various Forms of It Among Jews, Heathens and Christians, Deduced from It's First Origine to This Present Age. by James Owen
Available, ships in 8-11 days
$41.33 $45.92