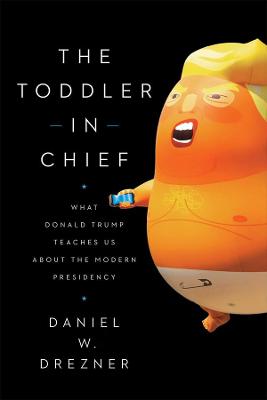 The Toddler-In-Chief: What Donald Trump Teaches Us about the Modern Presidency

Description - The Toddler-In-Chief: What Donald Trump Teaches Us about the Modern Presidency by Daniel W Drezner

"It may be cold comfort in this chaotic era, but Americans should know that there are adults in the room. . . . And we are trying to do what's right even when Donald Trump won't."-An anonymous senior administrative official in an op-ed published in a New York Times op-ed, September 5, 2018

Every president faces criticism and caricature. Donald Trump, however, is unique in that he is routinely characterized in ways more suitable for a toddler. What's more, it is not just Democrats, pundits, or protestors who compare the president to a child; Trump's staffers, subordinates, and allies on Capitol Hill also describe Trump like a small, badly behaved preschooler.

In April 2017, Daniel W. Drezner began curating every example he could find of a Trump ally describing the president like a toddler. So far, he's collected more than one thousand tweets-a rate of more than one a day. In The Toddler-in-Chief, Drezner draws on these examples to take readers through the different dimensions of Trump's infantile behavior, from temper tantrums to poor impulse control to the possibility that the President has had too much screen time. How much damage can really be done by a giant man-baby? Quite a lot, Drezner argues, due to the winnowing away of presidential checks and balances over the past fifty years. In these pages, Drezner follows his theme-the specific ways in which sharing some of the traits of a toddler makes a person ill-suited to the presidency-to show the lasting, deleterious impact the Trump administration will have on American foreign policy and democracy.

The "adults in the room" may not be able to rein in Trump's toddler-like behavior, but, with the 2020 election fast approaching, the American people can think about whether they want the most powerful office turned into a poorly run political day care facility. Drezner exhorts us to elect a commander-in-chief, not a toddler-in-chief. And along the way, he shows how we must rethink the terrifying powers we have given the presidency.


Buy The Toddler-In-Chief: What Donald Trump Teaches Us about the Modern Presidency by Daniel W Drezner from Australia's Online Independent Bookstore, Boomerang Books.

Book Reviews - The Toddler-In-Chief: What Donald Trump Teaches Us about the Modern Presidency by Daniel W Drezner

» Have you read this book? We'd like to know what you think about it - write a review about The Toddler-In-Chief: What Donald Trump Teaches Us about the Modern Presidency book by Daniel W Drezner and you'll earn 50c in Boomerang Bucks loyalty dollars (you must be a Boomerang Books Account Holder - it's free to sign up and there are great benefits!)


A Preview for this title is currently not available.
More Books By Daniel W Drezner
View All

The Ideas Industry: How Pessimists, Partisans, and Plutocrats are Transforming the Marketplace of Ideas
$43.97 $48.86