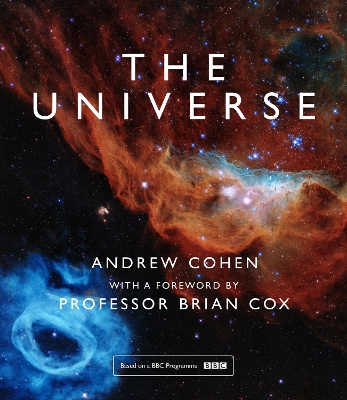 The Universe: The book of the BBC TV series presented by Professor Brian Cox

Description - The Universe: The book of the BBC TV series presented by Professor Brian Cox by Andrew Cohen

Every night, above our heads, a drama of epic proportions is playing out. Diamond planets, zombie stars, black holes heavier than a billion Suns. The cast of characters is extraordinary, and each one has its own incredible story to tell.
We once thought of our Earth as unique, but we have now discovered thousands of alien planets, and that's barely a fraction of the worlds that are out there. And there are more stars in the Universe than grains of sand on every planet in the Solar System. But amid all this vastness, the Milky Way Galaxy, our Sun and the Earth are home to the only known life in the Universe - at least for now.

With a foreword from Professor Brian Cox, and access to all the latest stunning NASA photography, Andrew Cohen takes readers on a voyage of discovery, via the probes and telescopes exploring the outer reaches of our galaxy, revealing how it was formed and how it will inevitably be destroyed by the enigmatic black hole at its heart. And beyond our galaxy, the expanding Universe, which holds clues to the biggest mystery of all - how did it all begin? We now know more about those first moments of existence than we ever thought possible, and hidden in this story of how it all began are the clues to the fate of the Universe itself and everything in it.

Book Reviews - The Universe: The book of the BBC TV series presented by Professor Brian Cox by Andrew Cohen

» Have you read this book? We'd like to know what you think about it - write a review about The Universe: The book of the BBC TV series presented by Professor Brian Cox book by Andrew Cohen and you'll earn 50c in Boomerang Bucks loyalty dollars (you must be a Boomerang Books Account Holder - it's free to sign up and there are great benefits!)


A Preview for this title is currently not available.
More Books By Andrew Cohen
View All

The Politics and Economics of Decolonization in Africa: The Failed Experiment of the Central African Federation
$55.79 $61.99