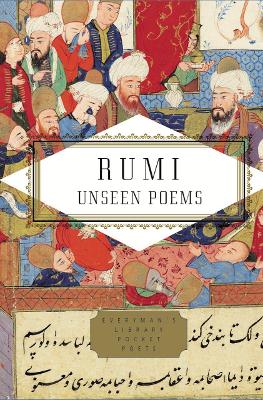 Description - The Unseen Poems by Rumi

A collection of never-before-translated poems by the Persian poet and Sufi master Rumi - the only medieval poet to have become a modern bestseller!

Rumi- Unseen Poems - the second volume of Rumi in the Everyman Pocket Poet series - is a treasury of poems which have never been translated before, researched and translated by Rumi biographer Brad Gooch and the Iranian writer Maryam Mortaz.
The thirteenth-century Persian poet Rumi was trained in Sufism, a mystic tradition within Islam. He founded the Mevlevi Order, often known as the Whirling Dervishes, who use dance and music as part of their spiritual devotion. His poetry combines the sacred and the sensual, expressing both rapturous divine love, and aching human love for his companion and teacher, Shams of Tabriz. It has long been popular in the West, never more so than in the last twenty-five years, when a new wave of free translations introduced him to an ever-widening audience.
However, some of these recent translations have been more in the nature of interpretations by writers who are not Persian speakers. Cultural and Islamic references central to an understanding of Rumi's poetry have been toned down or omitted. And so vast was Rumi's output that earlier scholarly translators were obliged to be selective, leaving a rich vein of verse still unmined. From this Gooch and Mortaz have made a selection of ghazals (short lyric poems) and rubaiyat (quatrains), aiming in their own translations to achieve fidelity to the originals while preserving all Rumi's lyric exuberance.
This book makes a perfect companion to the first Everyman volume of Rumi, which presents the very best of the twentieth-century translations.

» Have you read this book? We'd like to know what you think about it - write a review about The Unseen Poems book by Rumi and you'll earn 50c in Boomerang Bucks loyalty dollars (you must be a Boomerang Books Account Holder - it's free to sign up and there are great benefits!)


A Preview for this title is currently not available.
More Books By Rumi
View All