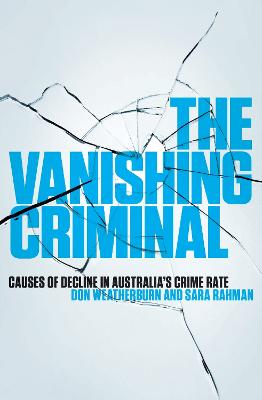 The Vanishing Criminal: Causes of Decline in Australia's Crime Rate

Then in 2001, Australian crime statistics began to decline. By 2018, rates of the most common forms of crime had fallen between 40 and 80 percent and were lower than they'd been in twenty or in some cases thirty years. Australia is not the only country to have experienced this social trend.

In The Vanishing Criminal Don Weatherburn and Sara Rahman set out to explain the dramatic fall in crime, rigorously but accessibly comparing competing theories against the available evidence. Their conclusions will surprise many and reshape the terms for discussion of these questions well into the future.

» Have you read this book? We'd like to know what you think about it - write a review about The Vanishing Criminal: Causes of Decline in Australia's Crime Rate book by Don Weatherburn and you'll earn 50c in Boomerang Bucks loyalty dollars (you must be a Boomerang Books Account Holder - it's free to sign up and there are great benefits!)


A Preview for this title is currently not available.
More Books By Don Weatherburn
View All