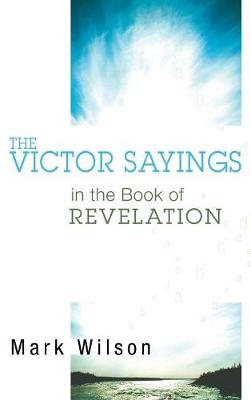 The Victor Sayings in the Book of Revelation

This is the first major study to focus solely on the victor sayings and should prove invaluable to scholars and students of Revelation and apocalyptic literature. It demonstrates that the motif of victory is Revelation's macrodynamic theme. Chiasmus is proposed as the book's macrostructure, based in part on the chiastic nature of the promises to the victors, with the later fulfillment of these promises in the book. The proposed forms for the seven letters--forms such as edicts, oracles, and epistles--are examined, and it is concluded that they are a mixtum compositum best called ""prophetic letters."" The sociological significance of victory is explored within the Greco-Roman world. The text of the promises and their co-texts (as reflected intertextually in traditions of biblical literature) receive thorough examination. The eschatological fulfillment of the victor sayings is surveyed in Revelation's later chapters, especially in chapters 21-22, where the new Jerusalem is depicted. The study concludes with an investigation of the ways that the promises were appropriated for the time and the text world of Revelation. ""In this volume Mark Wilson offers a study of the ""victor sayings"" found in the seven letters to the churches in Revelation 2-3. Wilson shows that the theme of victory--particularly the victory of Jesus Christ over the powers of evil--pervades the substance of John's visions, drawing frequently on the imagery of the victor sayings in the letters to the churches to do so."" --Jeffrey Lamp, Professor of New Testament, Oral Roberts University ""Wilson's volume is the first academic study to focus solely on the victor sayings in Revelation. Wilson argues convincingly that the victory of the saints, anchored in the victory of Jesus himself, emerges as a prominent theme of the book. The volume will serve as a standard source for scholars, students, and pastors interested in the historical and literary background of the letters to the seven churches."" --J. Rodman Williams, Emeritus Professor of Renewal Theology, Regent University ""Wilson understands and interprets the victor sayings in Revelation 2-3 in the Apocalypse of John by applying a kaleidoscope of scientific expositions of a section of the New Testament as part of the Christian Bible together with relevant sections in the Old Testament. Wilson's work of reemphasizing and substantiating the basics of the Christian hopes and expectations constitutes a major and vital contribution."" --Herman Lombard, Emeritus Professor of New Testament, University of South Africa Mark Wilson serves as the director of the Asia Minor Research Center in Izmir, Turkey, where he lives much of the year with his wife, Dindy. He is a research associate in the Department of Old Testament and Ancient Near Eastern Studies at the University of South Africa and serves as an adjunct professor of early Christianity at several seminaries. An author and editor of a number of books and articles, Wilson has released three other volumes on Revelation. He is a member of eight biblical and archaeological societies and often leads study tours in Turkey to the ""seven churches"" of Revelation.

Buy The Victor Sayings in the Book of Revelation by Mark Wilson from Australia's Online Independent Bookstore, Boomerang Books. » Have you read this book? We'd like to know what you think about it - write a review about The Victor Sayings in the Book of Revelation book by Mark Wilson and you'll earn 50c in Boomerang Bucks loyalty dollars (you must be a Boomerang Books Account Holder - it's free to sign up and there are great benefits!)


A Preview for this title is currently not available.
More Books By Mark Wilson
View All