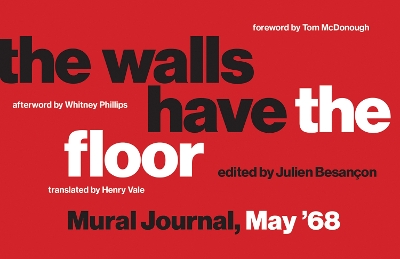 The Walls Have the Floor: Mural Journal, May '68

Description - The Walls Have the Floor: Mural Journal, May '68 by Julien Besancon

The graffiti of the French student and worker uprising of May 1968, capturing participatory politics in action.Graffiti itself became a form of freedom.
-Julien Besan on, The Walls Have the Floor
Fifty years ago, in 1968, barricades were erected in the streets of Paris for the first time since the Paris Commune of nearly one hundred years before. The events of May 1968 began with student protests against the Vietnam War and American imperialism, expanded to rebellion over student living conditions and resistance to capitalist consumerism. An uprising at the Sorbonne was followed by wildcat strikes across France, uniting students and workers and bringing the country's economy to a halt. There have been many accounts of these events. This book tells the story in a different way, through the graffiti inscribed by protestors as they protested.
The graffiti collected here is by turns poetic, punning, hopeful, sarcastic, and crude. It quotes poets as often as it does political thinkers. Many wrote "I have nothing to write," signaling not their naivete but their desire to participate. Other anonymous declarations included "Prohibiting prohibited"; "The dream is reality"; "The walls have ears. Your ears have walls"; "Exaggeration is the beginning of invention"; "Comrades, you're nitpicking"; "You don't beg for the right to live, you take it"; and "I came/I saw/I believed." A meeting is called at the Grand Amphitheater of the Sorbonne- "Agenda- the worldwide revolution." This was interactive, participatory politics before Twitter and Facebook.
Although the revolution of May 1968 didn't topple the government (Charles de Gaulle fled the country, only to return; in June, his party won a resounding electoral mandate), it made history. In The Walls Have the Floor, Julien Besan on collected traces of this history before the walls were painted over, and published this collection in July 1968 even as the paint was drying. Read today, the graffiti of 1968 captures, in a way no conventional history can, the defining spontaneity of the events.

Buy The Walls Have the Floor: Mural Journal, May '68 by Julien Besancon from Australia's Online Independent Bookstore, Boomerang Books.

Book Reviews - The Walls Have the Floor: Mural Journal, May '68 by Julien Besancon

» Have you read this book? We'd like to know what you think about it - write a review about The Walls Have the Floor: Mural Journal, May '68 book by Julien Besancon and you'll earn 50c in Boomerang Bucks loyalty dollars (you must be a Boomerang Books Account Holder - it's free to sign up and there are great benefits!)