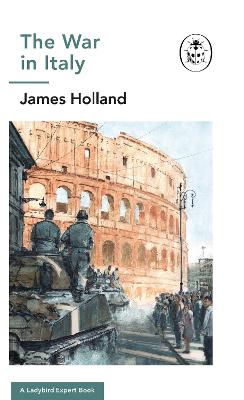 Description - The War in Italy: A Ladybird Expert Book: (WW2 #8) by James Holland

An accessible and authoritative introduction to the critical and complex Italian campaigns of WWII, from award-winning historian James Holland

- Why did the Allies decide to invade Southern Italy?
- How did the weather and Italian terrain complicate the fighting?
- How did General Mark Clark's Allied Armies win the final battle?

Discover the mounting conflict and complex campaigns of the war in Italy. From Operation HUSKY to Clark's final offensive, the Allied campaign tightened the noose around Nazi Germany and saw the end of Italian Fascism, though it was at a cost of high civilian casualty and destruction.

AN EPIC OF GRIT, DETERMINATION AND SACRIFICE

Written by historian, author and broadcaster James Holland and with immersive illustrations by Keith Burns, THE WAR IN ITALY 1943-1945 is an accessible and enthralling introduction to these critical battles and their impact on the outcome of World War II

» Have you read this book? We'd like to know what you think about it - write a review about The War in Italy: A Ladybird Expert Book: (WW2 #8) book by James Holland and you'll earn 50c in Boomerang Bucks loyalty dollars (you must be a Boomerang Books Account Holder - it's free to sign up and there are great benefits!)