The Whispers: The new impossible-to-put-down thriller from the bestselling author

Description - The Whispers: The new impossible-to-put-down thriller from the bestselling author by Heidi Perks

The gripping new page-turner from the author of NOW YOU SEE HER tells the story of a mother who disappears, and the four women who are left behind. What has happened to her? And what secrets are hidden in her past? For fans of Liane Moriarty and Lesley Kara.

Anna Robinson hasn't been seen since she went on a night out with her four closest friends.
She has a loving husband and a son she adores. Surely she wouldn't abandon them and her perfect life. . .

But what has happened to her?

At the school gates, it's not long before the rumours start. Anna's oldest friend Grace is beside herself with worry - desperately searching for answers, and certain that someone is hiding the truth.

'The Whispers is a twisty, gripping page-turner, which explores the toxic underside of female friendships. It is a heart-thumping thriller that kept me up late into the night' LUCY CLARKE

'Absorbing and beautifully observed, I was knocked for six by the twist in this book' ROSAMUND LUPTON

'I really loved it. The Whispers is a big-hearted psychological thriller about the dark corners that lurk in even the closest of friendships. Heidi Perks reads like Liane Moriarty at her Big Little Lies best as she brilliantly mines the jealously, spite and rage that lurk behind the polite smiles at every school gates. Highly recommended' TONY PARSONS
_________________________
Readers love Heidi's thrillers-

'This is a read not to be missed!!!'
'Family secrets, mystery and intrigue. This is the perfect book that won't disappoint'
'This is one of those books that you start to read and right from the outset it becomes completely addictive.'
'You find yourself unable to trust anyone!'
'A surprising plot and lots of twists with interesting characters. I loved the writing style and the setting of the story'
'Easily the best thriller I've read in a long time'
'Lots of twists and turns, guaranteed page-turner that keeps you guessing until the end'
'The ending took me by surprise'
'Couldn't put this one down - just one more chapter became something of a mantra!'
'I loved the book and the fact it kept me guessing till the end'

Other Editions - The Whispers: The new impossible-to-put-down thriller from the bestselling author by Heidi Perks 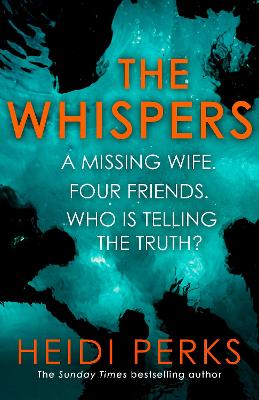 Book Reviews - The Whispers: The new impossible-to-put-down thriller from the bestselling author by Heidi Perks

» Have you read this book? We'd like to know what you think about it - write a review about The Whispers: The new impossible-to-put-down thriller from the bestselling author book by Heidi Perks and you'll earn 50c in Boomerang Bucks loyalty dollars (you must be a Boomerang Books Account Holder - it's free to sign up and there are great benefits!)

Book Review: The Whispers: The new impossible-to-put-down thriller from the bestselling author by Heidi Perks - Reviewed by Sarah (19 Apr 2021)

The Whispers is an enthralling psychological mystery/suspense read. Heidi Perks explores the dynamics, intricacies and intensities of female friendships, from childhood, through adolescence to motherhood and beyond. The book opens tantalisingly with the discovery on New Year's Day of a woman's body at the bottom of Crayne's Cliff, an area locals know to be prone to landslips. We're not told the victim's identity, but the detective from whose perspective the prologue is told recalls an earlier tragedy, involving a younger woman, and the fact that three weeks ago, a woman called Grace Goodwin had reported a crime... We're then taken back four months, as the narrative works forward to the present day. The point of view shifts between those of Grace Goodwin, Anna Robinson and a Greek chorus-like overview emanating from the observations of other parents in the school playground. Thirty-something mother of one Grace Goodwin has recently returned to her (fictional) childhood hometown of Clearwater, on the UK's south coast, having lived in Australia since late adolesence. Her husband has a high-flying job based in Singapore, so she's effectively a single mother of 8-year-old Matilda much of the time. She's looking forward to re-establishing a close friendship with Anna Fallow (now Robinson), with whom she enjoyed a childhood and teenage friendship akin to sisterhood. However, as the story slowly unfolds, through present day perspectives and occasional flashback sections, we realise that there is a darkness underpinning Grace and Anna's relationship. What is the past event that seems to preoccupy them both in the present day, and why does Anna seem so reticent to rekindle her close friendship with Grace? Heidi Perks skilfully uses foreshadowing, hints at the possible unreliability of the character's recollections, and immerses the reader in each woman's experience. Our sympathies are pulled back and forth as we observe the tensions between the central group of female characters. What loyalties do we owe our friends? Is the length of a friendship necessarily indicative of its strength or health for the protagonists? What can we reasonably expect from our friends, or they of us? At what point do we concede that we have outgrown a friendship and walk away? I found The Whispers a thought-provoking and deliciously suspenseful read. Any female reader will recognise the types of individual and group dynamics Heidi Perks describes, especially those of us who have observed and/or experienced playground (parent) politics ourselves! I would highly recommend The Whispers to any and all readers who enjoy character-based dramas set against a background of mystery and suspense. My thanks to the author Heidi Perks, publisher Penguin Random House UK - Cornerstone - Century imprint, and NetGalley for the opportunity to read and review this title. (Thanks also to Carolyn, whose excellent review prompted me to seek out a last-minute ARC)


A Preview for this title is currently not available.
More Books By Heidi Perks
View All

The Whispers: The new impossible-to-put-down thriller from the bestselling author
$30.77 $34.19