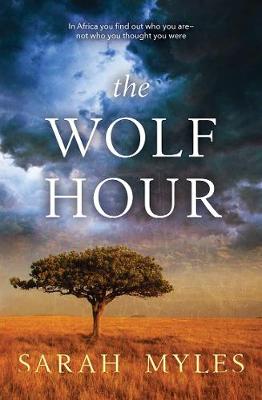 The Wolf Hour: A Novel of Africa

Description - The Wolf Hour: A Novel of Africa by Sarah Myles

A searing contemporary thriller about an Australian family in crisis against the backdrop of war-torn Africa.

Thirty-year-old Tessa Lowell has a PhD in psychology and is working in Uganda to research the effects of PTSD and war on child soldiers. She joins a delegation travelling across the Congolese border, deep into the African bush, for peace talks with Joseph Kony, notorious leader of the Lord's Resistance Army.

At the camp Tessa meets thirteen-year-old Francis, already an experienced soldier and survivor of shocking violence. The talks stall, and the camp is attacked by other rebels who take Tessa. Isolated in an increasingly volatile situation, she tries to form a bond with Francis.

In Melbourne, Tessa's parents are notified of the kidnapping, but learn there is little that government agencies can do. Desperate, they contact their son Stephen, an astute if manipulative businessman based in Cape Town. He agrees to search for his sister but has other reasons to contact the rebel forces.

As Tessa's time runs out, her family begins to fracture. Her parents arrive in Uganda to hear awful news about what she has endured. They also learn the devastating truth about the kind of man their son has become. Only they have the power to stop a terrible injustice. But at what cost to their family?

Other Editions - The Wolf Hour: A Novel of Africa by Sarah Myles 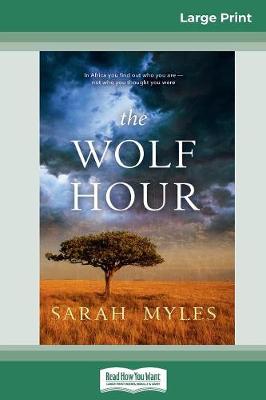 Book Reviews - The Wolf Hour: A Novel of Africa by Sarah Myles

» Have you read this book? We'd like to know what you think about it - write a review about The Wolf Hour: A Novel of Africa book by Sarah Myles and you'll earn 50c in Boomerang Bucks loyalty dollars (you must be a Boomerang Books Account Holder - it's free to sign up and there are great benefits!)

Book Review: The Wolf Hour: A Novel of Africa by Sarah Myles - Reviewed by CloggieA (28 Aug 2018)

4 stars The Wolf Hour is the second novel by Australian author, Sarah Myles. It’s not uncommon for families with adult children to be living remote from each other. Award winning photographer, Neil Lovell leads his fairly ordinary life in Melbourne with his wife, Leigh, a medical practitioner. Their son Stephen runs a sporting goods business in Cape Town with his South African school mate, Matt Reba. And their daughter Tessa, a psychology PhD, is in Gulu, Uganda, doing research on PTSD. That location allows her to interact with child soldiers who are in the process of rehabilitation.

All their lives are turned upside down when Tessa is abducted by the Lord’s Resistance Army, a ruthlessly violent rebel group known for taking children. In the rebel camp, Tessa establishes contact with young soldier, Francis Amayo, hopeful that he may be her means of escape, but also to further her research.

Getting no satisfaction from Government agencies, Neil and Leigh ask Stephen to track down Tessa while they make their own travel arrangements. Their relationship with him is somewhat fraught and it is with misgivings they ask him to help; those misgivings only increase as they learn more about his activities in South Africa. By the time they arrive in Uganda, blame has been apportioned, guilt and worry are uppermost in their minds, and their marriage is under considerable strain.

Neil realises he may have been too indulgent with his children. He’d opted for lenience, a liberal tolerance when raising his son “…but if he was afraid of the things Stephen might do, then he also loved him with a father’s hopeful pride and irrational loyalty, the same impulse that made him jump to Stephen’s defence whenever someone else found fault in him.”

In this fast-paced thriller, Myles gives the reader an interesting insight into the mindset of a child soldier, and shows just how the leader’s charisma, combined with superstition, ignorance, a good deal of brainwashing and the will to survive, produces these young killers.

The plot is original, taking an unpredictable direction, with a nail-biting climax and a realistic ending. Tessa’s initial choices seem incredibly naïve, and the depth of her bond with the Ugandan locals is not convincing enough for her later decisions to ring completely true. A basic map would have been a welcome addition to this gripping page-turner. This unbiased review is from an uncorrected proof copy provided by Allen&Unwin

The Girl Who Takes an Eye for an Eye: Continuing Stieg Larsson's Millennium Series
David Lagercrantz
$16.99 $19.99