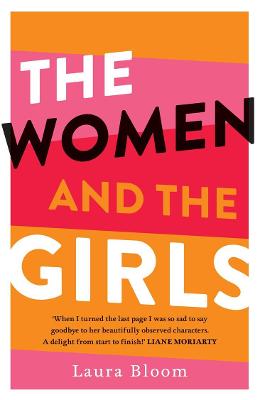 The Women and the Girls

Description - The Women and the Girls by Laura Bloom

'Laura Bloom has such a unique talent for modern historical fiction and this time it was a joy to be catapulted back to the 1970s. When I turned the last page I was so sad to say goodbye to her beautifully observed characters. A delight from start to finish!' Liane Moriarty

It's 1977, and warm, bohemian Libby - stay-at-home mother, genius entertainer and gifted cook - is lonely. When she meets Carol, who has recently emigrated from London with her controlling husband and is feeling adrift, and Anna, who loves her career but not her marriage, the women form an unexpected bond.

Their husbands aren't happy about it, and neither are their daughters.

Set against a backdrop of inner-city grunge and 70s glamour, far-out parties and ABBA songs, The Women and The Girls is a funny, questioning and moving novel about love, friendship, work, family, and freedom.

Buy The Women and the Girls by Laura Bloom from Australia's Online Independent Bookstore, Boomerang Books.

Book Reviews - The Women and the Girls by Laura Bloom

» Have you read this book? We'd like to know what you think about it - write a review about The Women and the Girls book by Laura Bloom and you'll earn 50c in Boomerang Bucks loyalty dollars (you must be a Boomerang Books Account Holder - it's free to sign up and there are great benefits!)

Book Review: The Women and the Girls by Laura Bloom - Reviewed by CloggieA (13 Jan 2021)

4.5?s The Women and The Girls is the eighth novel by Australian screenwriter and author, Laura Bloom. None of them is truly happy. Libby’s husband is uninvolved and doesn’t seem prepared to change that; Anna’s husband avoids intimacy; and Carol’s has to control everything. They don’t know each other well, but their daughters are friendly at school.

The day that Carol leaves Steve, during the ABBA concert, is the day that Anna makes a discovery and a decision. They end up at Libby’s, but not for long: by the next night, all three women have packed up their children and moved into a vacant house Anna owns. It’s a bold move in 1977, radical, some would say. The estranged husbands are not happy; the kids aren’t at all sure. Nor are the women, but they are determined.

Anna mused: “There was no script for this, no certainty. There were no milestones to measure her progress against, or key performance indicators to be ticked off. For the first time in her life she was flying blind, and there was no way to predict how it would unfold.”

Anna continues her high-power Market Research job; Libby’s area of expertise is in homemaking, her meals, chef quality; Carol is a talented hairdresser with a dream. They learn to cooperate and coordinate and to treat each other with consideration; they also discover they can revel in each other’s company instead of being lonely, and count on each other for support. But, in their enthusiasm, are they forgetting something? And will their nascent friendship be robust enough to counter the tactics of a psychopath?

Bloom easily evokes the era: fondues, ABBA, the Holden Kingswood, fashion and hair styles, TV programs and children’s games, politics and world affairs, so many casual mentions scream late 1970s, and for readers of a certain vintage, the lives of these characters will resonate strongly and perhaps quite fondly. Certain aspects of that patriarchal society, though, will be recalled with undisguised loathing.

Bloom gives her characters wise words and insightful observations: “I know we can’t just add water and always magically get along… it’s not as though it’s automatic for us to be friends, just because we’re women and have some things in common… We need to be able to talk about difficult things and to argue. We need to be able to be wrong sometimes. Or even a lot of the time, maybe.”

This less-than-predictable tale is quite credible, takes a few turns, is (sometimes darkly) funny, and has a fairly realistic ending. Bloom’s women, endowed with both depth and a generous helping of human flaws, are sufficiently endearing that the reader will be cheering them on in their successes and commiserating with their failures. An appealing, entertaining and enjoyable read. This unbiased review is from an uncorrected proof copy provided by Allen & Unwin.


A Preview for this title is currently not available.
More Books By Laura Bloom
View All