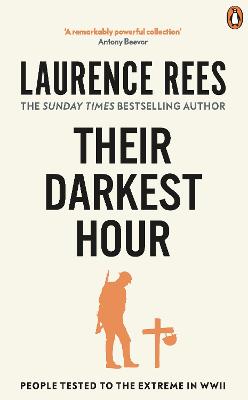 People Tested to the Extreme in WWII

How could Nazi killers shoot Jewish women and children at close range? Why did Japanese soldiers rape and murder on such a horrendous scale? How was it possible to endure the torment of a Nazi concentration camp?

Award-winning documentary maker and historian Laurence Rees has spent nearly 20 years wrestling with these questions in the course of filming hundreds of interviews with people tested to the extreme during World War II. He has come face-to-face with rapists, mass murderers, even cannibals, but he has also met courageous individuals who are an inspiration to us all.

In Their Darkest Hour he presents 35 of his most electrifying encounters.

» Have you read this book? We'd like to know what you think about it - write a review about Their Darkest Hour book by Laurence Rees and you'll earn 50c in Boomerang Bucks loyalty dollars (you must be a Boomerang Books Account Holder - it's free to sign up and there are great benefits!)

Laurence Rees won the British Book Award for History Book of the Year 2006 for his international bestseller Auschwitz- The Nazis and the 'Final Solution'. His career as a writer and filmmaker, focusing on the Nazis and World War II, stretches back nearly 20 years and includes the acclaimed television series Nazis- A Warning from History, War of the Century, Horror in the East and Auschwitz- The Nazis and the 'Final Solution'. This body of work has won him myriad awards including a BAFTA, a Grierson Award and an International Documentary Award. He was educated at Solihull School and Oxford University, and is Creative Director of BBC TV History programmes.

A Preview for this title is currently not available.
More Books By Laurence Rees
View All