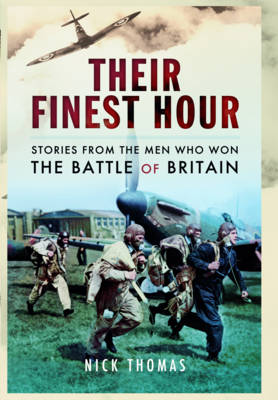 Stories from the Men Who Won the Battle of Britain

'Their Finest Hour' tells the fascinating stories of six of Churchill's 'Few', each of whom played an important part in the Battle of Britain. Celebrated and much respected on their own squadrons, all have since faded into obscurity. Their achievements, against all odds, and the fortunes of their comrades-in-arms, many of whom died during the Battle, are told here in detail, some for the first time. This has been done in an effort to retrieve these stories from obscurity, bringing them to a wider audience and ensuring they are not forgotten Featured stories include that of Flying Officer Reginald Peacock DFC, the only Blenheim pilot of the Second World War to become a fighter ace; Squadron Leader Robert Reid, who flew throughout the Battle of Britain, having a hand in the destruction of three Bf 109s, and the damaging of two more; and Pilot Officer Douglas Cyril Winter, who flew Spitfires during the defence of the Dunkirk Beaches, before taking on the Luftwaffe in the skies over Southern England. All these stories offer insights into this dynamic period of aviation history. Recorded here, they serve as poignant reminders of the efforts of the 'Few' and the contributions that they made to the Allied effort during the Second World War. AUTHOR: Jim Crossley read Modern History at Cambridge. He has had a lifelong interest in naval affairs. He is himself a keen sailor and springs from a family with a long naval tradition. His own father was a midshipman on the battleship Resolution in 1916 and his mother was a cousin of Commodore William Goodenough, one of the central figures in the Jutland battle. SELLING POINTS: Tells the fascinating stories of six of Churchill's 'Few' during the Battle of Britain. Explains the circumstances under which these pilots rose to prominence and describes how they each responded to the demands of the battle. This is a lively and engaging study, written to commemorate the efforts of the 'Few'. Supplemented by a thoughtful selection of photographic illustrations. Illustrated

» Have you read this book? We'd like to know what you think about it - write a review about Their Finest Hour book by Nick Thomas and you'll earn 50c in Boomerang Bucks loyalty dollars (you must be a Boomerang Books Account Holder - it's free to sign up and there are great benefits!)

Nick Thomas is a former archaeologist and finds expert. He currently works as Collections Officer for a local authority, having been manager of the ground-breaking Stafford Castle Visitor Centre and Museum, with which he has a 35 year association. Nick has contributed history articles to a number of archaeological journals and the local press, while finding time to work on many of the 'digs' in his home town. In recent years he has co-written the definitive history of his home town and is currently writing a companion volume on Staffordshire.Previous aviation biographies by the same author include RAF Top Gun: The Story of Battle of Britain Ace Teddy Donaldson, CB, CBE, DSO, AFC; Ben Bennions, DFC: Battle of Britain Fighter Ace; Kenneth 'Hawkeye' Lee, DFC: Battle of Britain and Desert Air Force Ace; Hurricane Squadron Ace: The Story of Air Commodore Peter Brothers, CBE, DSO, DFC*; and Sniper of the Skies: The Story of George 'Screwball' Beurling, DSO, DFC, DFM*, all published by Pen and Sword Books.

A Preview for this title is currently not available.
More Books By Nick Thomas
View All

Into the Valley of Death: The Light Cavalry at Balaclava
No Stock on Hand, Supplier Has No Due Date for Supply.
$67.50 $75.00