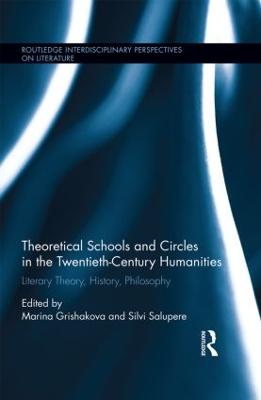 Theoretical Schools and Circles in the Twentieth-Century Humanities

Schools and circles have been a major force in twentieth-century intellectual movements. They fostered circulation of ideas within and between disciplines, thus altering the shape of intellectual inquiry. This volume offers a new perspective on theoretical schools in the humanities, both as generators of conceptual knowledge and as cultural phenomena. The structuralist, semiotic, phenomenological, and hermeneutical schools and circles have had a deep impact on various disciplines ranging from literary studies to philosophy, historiography, and sociology. The volume focuses on a set of loosely interrelated groups, with a strong literary, linguistic, and semiotic component, but extends to the fields of philosophy and history-the interdisciplinary conjunctions arising from a sense of conceptual kinship. It includes chapters on unstudied or less studied groups, such as Tel Aviv School of poetics and semiotics or the research group Poetics and Hermeneutics. The volume presents a significant supplement to the standard historical accounts of literary, critical, and related theory in the twentieth century. It enhances and complicates our understanding of the twentieth-century intellectual and academic history by showing schools and circles in the state of germination, dialogue, controversy, or decline, in their respective historical and institutional settings, while reaching simultaneously beyond those dense settings to the new cultural and ideological situations of the twenty-first century. » Have you read this book? We'd like to know what you think about it - write a review about Theoretical Schools and Circles in the Twentieth-Century Humanities book by Marina Grishakova and you'll earn 50c in Boomerang Bucks loyalty dollars (you must be a Boomerang Books Account Holder - it's free to sign up and there are great benefits!)

Marina Grishakova is Associate Professor of Comparative Literature at the University of Tartu. She is the author of The Models of Space, Time and Vision in V. Nabokov's Fiction: Narrative Strategies and Cultural Frames (2nd ed. 2012) and a co-editor of Intermediality and Storytelling (with Marie-Laure Ryan, 2010). Her articles appeared in Narrative, Sign Systems Studies, Revue de litterature comparee and international volumes, such as Strange Voices in Fiction (2011), Disputable Core Concepts in Narrative Theory (2012), Literature, History and Cognition (2014), and Intersections, Interferences, Interdisciplines: Literature with Other Arts (2014). Silvi Salupere teaches in the Department of Semiotics at the University of Tartu. She is a co-editor of Sign Systems Studies, Tartu Semiotics Library, Acta Semiotica Estica and (with Jan Levchenko) Conceptual Dictionary of the Tartu-Moscow Semiotic School (1999).

A Preview for this title is currently not available.
More Books By Marina Grishakova
View All

Theoretical Schools and Circles in the Twentieth-Century Humanities
$90.08 $90.99