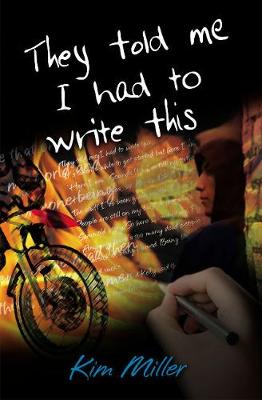 They Told Me I Had To Write This

Clem is a boy in strife. Blamed for the death of his mother, carrying a terrible secret from Grade 5 and in trouble with the police, he's now in a school for toxic teenagers. And that rev-head school counsellor wants him to write letters.

Through his writing Clem goes deep into the trauma that has defined his life. Then he comes face to face with his mother's death.

In a rush of bush bike racing, the death of one student and the consequent arrest of another, an unexpected first girlfriend, and some surprising friendships, Clem's story is the celebration of a boy who finds an unexpected future.

Buy They Told Me I Had To Write This by Kim Miller from Australia's Online Independent Bookstore, Boomerang Books. 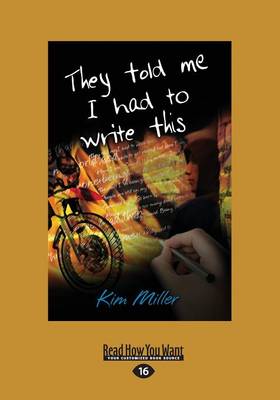 » Have you read this book? We'd like to know what you think about it - write a review about They Told Me I Had To Write This book by Kim Miller and you'll earn 50c in Boomerang Bucks loyalty dollars (you must be a Boomerang Books Account Holder - it's free to sign up and there are great benefits!)

‘They Told Me I Had to Write This’ is about more than Revs and bikes and racing. But that fast riding bike theme will initially attract a youthful readership.

The sustained viewpoint of Clem, who is at the school for toxic teenagers, is credible. These are the kids who are too hot to handle. Gran and his Mum are dead, and initially we’re not sure why. He’s told to write regularly to his dead Gran as a way of coming to terms with what’s happened. So he does, candidly. Clem astutely evaluates teachers, counsellors and the other boys, while still trying to find his own answers. He’s no fool, just a damaged teen. in difficult circumstances, some of which were not his fault.

The author doesn’t shy away from serious issues, such as drugs, bullies, death and police implications, but it’s well paced, with in-between humour, which will appeal to the age group of 13 upwards.

Underneath, there’s a yearning for family and a rough compassion for other boys who are doing it tough. The girlfriend Ultra Violet and her family provide hope, and delicate under-writing about a ‘first love’ from a romantic Clem.

There’s teen humour, such as the ‘dare’: which is a dogfood eating episode on camp (really prepared chopped Mars bars in a can). The yearning for family is symbolised by the Rev on the bike, with the ‘koala’ seat for his kid on the back, while Clem’s Dad doesn’t know what to do, but tries. Only later at the funeral, Clem discovers that the Rev’s name applies to his other job, not just the counsellor’s bike riding skills. (The author works in prison chaplaincy)

The cover works, combining the bike wheel and the handwriting. The graphic of the occasional hand written page from Clem’s perspective, within the chapters gives extra insight. His DVD reviews in different fonts, are his attempts to make books they read in this school relevant to his life.

Teachers, parents and educators are always worried about YA books that deal with ‘edgy’ subjects. But the reason I’d recommend this book, is the strength of the Clem character, despite his vulnerability. It’s realistic, but hopeful.

I have to declare ‘insider knowledge’. In 2007, I was invited to Condobolin in outback NSW, to run workshops for a community struggling with drought. Locals wanted to have a literary festival to attract business and energy to the town. Ex-Condobolin-ite Kim Miller came back to town that weekend, with the beginnings of this ‘Clem’ manuscript, which was workshopped during the festival.

‘They Told Me I Had to Write This’ is the result, which made that rural initiative very worthwhile, even if my mobile didn’t work in the remote Shire of Bland in which Condobolin is situated. This book is not bland.

Clem has problems – big problems. He is nursing the hurt of a lifetime: his mother’s death, which he feels responsible for, his father’s indifference towards him and a horrible secret that threatens to tear him apart. After years of troubled behaviour he lands himself in Rock Valley, a school for problem teens where he meets The Rev, a Falcon driving, motorbike thrashing counsellor. Encouraged to start writing as part of his therapy, Clem documents in a series of letters to his dead grandmother life at Rock Valley, and most importantly, all the emotions he’s bottled up for so long. Bit by bit Clem reveals to the reader – and himself – the cause of all his angst and is finally able to begin the healing process.

They Told Me I Had To Write This is reminiscent of many of John Marsden’s novels – Letters From the Inside, So Much To Tell You and Dear Miffy spring to mind -- with one major difference: Miller has managed to infuse his narrative with a greater sense of hope and, on the character’s part, accomplishment than Marsden did. At the end of Clem’s story (which, of course, for him, is just the beginning), I wasn’t dogged by the dark cloud Marsden’s stories seemed to leave me under. Perhaps this is just me, but I feel it worth noting.

Miller’s voice is fresh and his characters authentic. This glimpse into Clem’s world is both informative and entertaining; readers will feel his emotional turmoil, and for those who’ll no doubt identify with much of what Clem is going through, Miller offers genuine solutions to these conflicts. Holding a PhD in Psychology, Miller’s insights are well informed.

They Told Me I had To Write This deserves a place on every library shelf. Endorsed by such heavyweights as: Rowland Croucher, World Vision executive, author, editor and broadcaster (among other things), and Director of Real Justice, Terry O’Connell, whose work with young offenders earned him The Order of Australia Medal, this is far more than just a story. The trailer for this book can be found at: http://home.exetel.com.au/homeforgood/ClemAlex4.avi

No one told me I had to write this – except deep down inside myself. Because it’s not often you find a book that grabs your heart, wrings it out – then refreshes it with hope. And all this through a bunch of colloquial letters.

Kim Miller has a heart for troubled teens and this is clearly evident in They told me I had to write this. He speaks the language (which I didn’t always ‘get’ straight away!) and tells some awful truths – but he gets you inside the head of a wild child – and once you’re in Clem’s head, he soon digs into your heart. I had not expected to find Clem so lovable.

Oh, he was very real. And far from perfect. But he was lovable!

The ending was totally unexpected – and so quick! I usually like more warning of an ending – with ‘this’ suddenly I was on the last page and thinking, “No! It’s not going to finish properly.” Yet it did. Real sentiment – no sop or cliché. Just a perfect resolution of all that had been building – and I’d missed all the clues! (It was so simple that I actually feel a bit stupid admitting that I’d missed it!)

They told me I had to write this is an incredible story that will have repercussions wherever it is read. I just hope it’s read widely!

Kim Miller grew up freewheeling the backstreets of country NSW but now lives on coastal Lake Macquarie. First studying engineering, he holds a PhD blending theology and Jungian psychology. Kim was a prison chaplain for many years and now works with men coming out of prison.

Boomerang Books customers who bought They Told Me I Had To Write This by Kim Miller also bought the following titles: 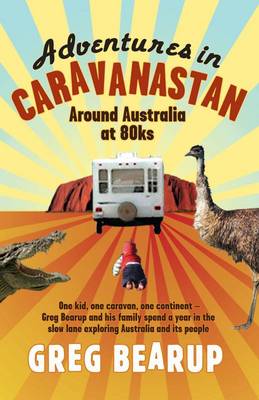 The Good Thing Right Here is Not the Same as the Thing That is Not Right Here
Paperback / softback, July 2016
View All Books By Author Kim Miller