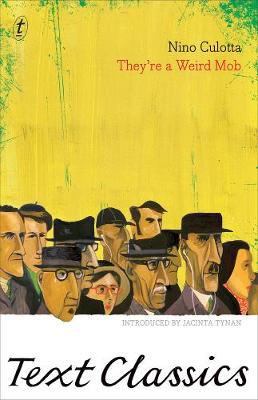 They're A Weird Mob

Description - They're A Weird Mob by Nino Culotta

Introduced by Jacinta Tynan Who the hell's Nino Culotta. That's what you asked yourself when you first picked up this book, wasn't it? Well I'm Nino Culotta. My father baptised me Giovanni - John - well Giovannino is like Johnny, and Nino is an easier way of saying it. Or a lazier way, if you like. Just off the boat from Italy - the north - Nino Culotta arrives in Sydney. He thought he spoke English but he's never heard anything like the language these Australians are speaking. They're a Weird Mob is an hilarious snapshot of the immigrant experience in Menzies-era Australia, by a writer with a brilliant ear for the Australian way with words. www.textclassics.com.au

Other Editions - They're A Weird Mob by Nino Culotta 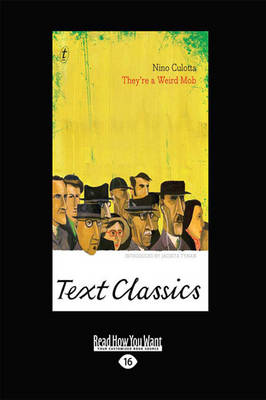 Book Reviews - They're A Weird Mob by Nino Culotta

» Have you read this book? We'd like to know what you think about it - write a review about They're A Weird Mob book by Nino Culotta and you'll earn 50c in Boomerang Bucks loyalty dollars (you must be a Boomerang Books Account Holder - it's free to sign up and there are great benefits!)

They’re a Weird Mob is the first book by John O’Grady writing under the pseudonym Nino Culotta, and purports to tell the tale of Nino, an Italian journalist sent to Australia to write articles about the country and her people for Italians to read. Nino has learned English, so he shouldn’t have a problem, his boss thinks. But English, Nino finds, is not Australian. As Nino experiences true Aussie culture in the form of Kings Bloody Cross, labouring for a brickie, drinking in the pub, picking a fight in the street, almost being arrested, travelling on the train, being invited to tea, a buck’s night, a wedding reception, going shooting and swimming at Bondi, he relates his interactions with Australians and his puzzlement with their language. Some of the conversations he overhears, like the discussion of horse racing in a café, are confusing to me now, after having lived in Australia for 55 years. Nino learns about the attitude of many Australians to migrants, but finds his appearance and his willingness to “have a go” soon defuse this, and finds himself taking part in many Aussie-male rites of passage. He also learns that many words (ticket, drum, shout, before, only) have multiple meanings. This novel is a very long way from being Politically Correct: when Nino decides he wants to marry, the discussion on “sheilas” begins “blondes are easy on the eye, but they get dirty quick”. One needs to remember, though, that it was written in 1957, and reflects attitudes of the day, and if one bears this in mind, there are many laugh-out-loud moments. While O’Grady’s writing does an excellent job of portraying a naïve Italian migrant, his eulogising about the Australian and how to become a good one is a bit transparent. Hilarious!

John O'Grady was born in Waverley on 9 October 1907. Soon afterwards his father resigned from his job as editor of the New South Wales Agricultural Gazette and moved the family to a remote farm in the Peel Valley near Tamworth, where he was eventually to go broke. John was educated at home by his father along with several of his seven brothers and sisters. When he was twelve, John went to the Catholic school in Tamworth and later to St Stanislaus' College, Bathurst. He hoped to become a doctor but there was no money and he graduated from Sydney University as a pharmacist, a profession he never much liked. John O'Grady was married three times, and had four children. He wrote for most of his adult life, but did not publish a book until he dreamed up They're a Weird Mob to win a bet. He was fifty when it came out. It remains one of the most successful titles in Australian publishing history. O'Grady abandoned pharmacy and went on to write fifteen more books. In 1959 he published his famous comic poem `The Integrated Adjective', better known as `Tumba Bloody Rumba' in the Bulletin. He died in Sydney in 1981.

A Preview for this title is currently not available.
More Books By Nino Culotta
View All