'I loved Himself and The Hoarder but this book takes things to another level - thrilling, mysterious, twisted but more than anything, beautifully written and filled to bursting point with heart.' - Graham Norton

London, 1863. Bridie Devine, the finest female detective of her age, is taking on her toughest case yet. Reeling from her last job and with her reputation in tatters, a remarkable puzzle has come her way. Christabel Berwick has been kidnapped. But Christabel is no ordinary child. She is not supposed to exist.

As Bridie fights to recover the stolen child she enters a world of fanatical anatomists, crooked surgeons and mercenary showmen. Anomalies are in fashion, curiosities are the thing, and fortunes are won and lost in the name of entertainment. The public love a spectacle and Christabel may well prove the most remarkable spectacle London has ever seen.

Things in Jars is an enchanting Victorian detective novel that explores what it is to be human in inhumane times.


Other Editions - Things in Jars by Jess Kidd 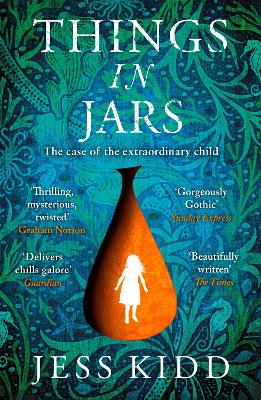 » Have you read this book? We'd like to know what you think about it - write a review about Things in Jars book by Jess Kidd and you'll earn 50c in Boomerang Bucks loyalty dollars (you must be a Boomerang Books Account Holder - it's free to sign up and there are great benefits!)

5 stars Things In Jars is the third novel by London-born author, Jess Kidd. Irish widow(?) and investigator, Bridie Devine doesn’t believe in ghosts, but deceased champion boxer and tattooed seafarer Ruby Doyle is hanging around, insisting she knows him and generally distracting her from a case she needs to solve. Six-year-old Christabel Berwick, the secret child of Sir Edmund Berwick, was taken from her Windsor home in the dead of night. He wants her found, discreetly, without fuss. No Police!

Neither Sir Edmund’s personal physician and friend, Dr William Harbin, who is initially sent to engage Bridie, nor Sir Edmund himself is entirely forthcoming with information about the missing girl, save that she has “singular traits”. These are scantily described, and Sir Edmund becomes obstructive when Bridie needs to examine the scene, but she is nothing if not resourceful. What she does find immediately takes her back to her own childhood years apprenticed to a surgeon and collector of anatomical curiosities: things in jars.

The reader is immediately aware that the child’s newly employed nurse, Mrs Bibby has orchestrated the kidnap, with the assistance of Dr Harbin, intending to sell the child for profit (to whom?), but their plans have come partially unstuck due to their own greed.

Kidd sets her story in late 1863 London, with flashbacks to 1843, and populates it with a cast of quirky characters, giving many a marvellous description, if not a potted history: “Dr Harbin puts a hand up to stroke his whiskers, one side and then the next, gently, reassuringly, as if they are fretful pets about to jump off his face.” Plenty of the characters are nasty types, but there are also many with pure intentions. Obsessive anatomists and the mythical merrow play important parts; disguises and aliases also feature.

The plot is original and having the inquisitive ghost of Ruby Doyle shadowing Bridie is a clever device that allows her to subtly impart necessary information, while Mrs Bibby covers some background with the stories she tells Christabel.

Kid’s strength is her descriptive prose: “Follow the fulsome fumes from the tanners and the reek from the brewery, butterscotch rotten, drifting across Seven Dials. Keep on past the mothballs at the cheap tailor’s and turn left at the singed silk of the maddened hatter. Just beyond you’ll detect the unwashed crotch of the overworked prostitute and the Christian sweat of the charwoman. On every inhale a shifting scale of onions and scalded milk, chrysanthemums and spiced apple, broiled meat and wet straw, and the sudden stench of the Thames as the wind changes direction and blows up the knotted backstreets. Above all, you may notice the rich and sickening chorus of shit.”

Kidd’s third novel is a brilliant read: atmospheric, often blackly funny, sometimes sad, with an exciting climax. It will be interesting to see what this talented author does next.


A Preview for this title is currently not available.
More Books By Jess Kidd
View All