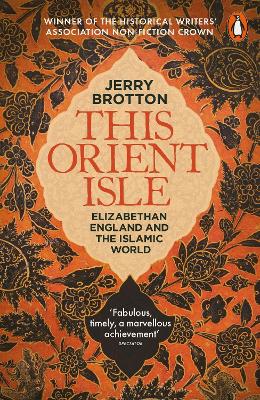 Elizabethan England and the Islamic World

In 1570, after plots and assassination attempts against her, Elizabeth I was excommunicated by the Pope. It was the beginning of cultural, economic and political exchanges with the Islamic world of a depth not again experienced until the modern age. England signed treaties with the Ottoman Porte, received ambassadors from Morocco and shipped munitions to Marrakech in the hope of establishing an accord which would keep the common enemy of Catholic Spain at bay. This awareness of the Islamic world found its way into many of the great English cultural productions of the day - especially, of course, Shakespeare's Othello and The Merchant of Venice. This Orient Isle shows that England's relations with the Muslim world were far more extensive, and often more amicable, than we have ever appreciated, and that their influence was felt across the political, commercial and domestic landscape of Elizabethan England.

Other Editions - This Orient Isle by Jerry Brotton » Have you read this book? We'd like to know what you think about it - write a review about This Orient Isle book by Jerry Brotton and you'll earn 50c in Boomerang Bucks loyalty dollars (you must be a Boomerang Books Account Holder - it's free to sign up and there are great benefits!)

Jerry Brotton is Professor of Renaissance Studies at Queen Mary University of London. He is a regular broadcaster and critic as well the author of Renaissance Bazaar: From the Silk Road to Michelangelo, The Sale of the Late King's Goods: Charles I and his Art Collection (shortlisted for the Samuel Johnson Prize for Non-Fiction and the Hessell-Tiltman History Prize) and the bestselling and award-winning A History of the World in Twelve Maps, which has been translated into twelve languages.

A Preview for this title is currently not available.
More Books By Jerry Brotton
View All