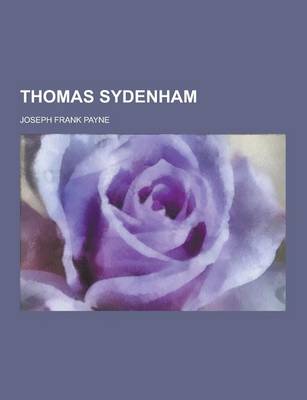 This historic book may have numerous typos and missing text. Purchasers can usually download a free scanned copy of the original book (without typos) from the publisher. Not indexed. Not illustrated. 1900 edition. Excerpt: ... II The F1ght1ng Sydenhams WHEN Thomas Sydenham left Oxford in the summer of 1642, his University career checked at the outset, he found his native county in a state of active preparation for war. Political feeling was strong there, and was mainly on the side of the Parliament. Dorchester especially is spoken of by Clarendon as the most "malignant" (i.e., Puritan) place in England. Even before Charles I. had raised his standard at Nottingham, men were drilled and mustered in Dorsetshire to support the Parliament. In August Dorchester and Poole were fortified, to guard against a suspected design of the Marquis of Hertford to seize them for the King, and shortly afterwards soldiers and ammunition were sent down by the Parliament, which also contributed to the expense of fortification. In these proceedings it is probable the Sydenham family took part, but we find no definite record of their being employed on the Parliamentary side till April, 1643, when the eldest brother, William Sydenham, received a commission as captain of a troop of horse, his position in the county, and probably the proof he had already given of energy and capacity, enabling him to dispense with passing through any inferior rank. His rise was rapid, for in December of the same year he became a colonel. The military service of Thomas Sydenham must have begun in the same year, but we do not find him mentioned till the next year, 1644, under circumstances which will be spoken of later. It is curious to remark that the very fact ot Sydenham's having served in the Parliamentary army, though always established by direct contemporary testimony, has been strangely obscured and even denied in later times. In the great biographical dictionary of the last century, the "Biographia... 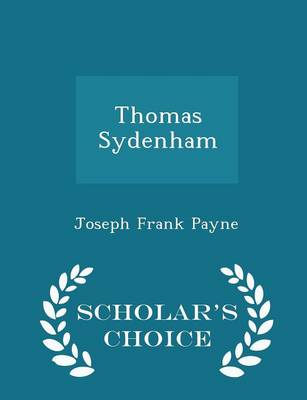 » Have you read this book? We'd like to know what you think about it - write a review about Thomas Sydenham book by Joseph Frank Payne and you'll earn 50c in Boomerang Bucks loyalty dollars (you must be a Boomerang Books Account Holder - it's free to sign up and there are great benefits!)


A Preview for this title is currently not available.
More Books By Joseph Frank Payne
View All

Notes to Accompany a Facsimile Reproduction of the Diploma of Doctor of Medicine Granted by the University of Padua to William Harvey 1602: With a Translation
$69.48 $77.20