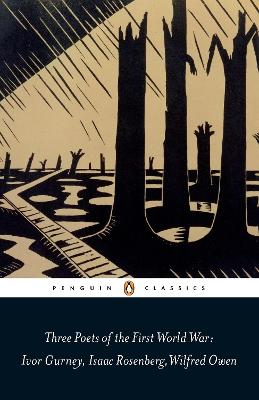 'Who died on the wires, and hung there, one of two - Who for his hours of life had chattered through Infinite lovely chatter of Bucks accent' This new selection brings together the poetry of three of the most distinctive and moving voices to emerge from the First World War. Here are the controlled passion and rich metaphors of Wilfred Owen's celebrated verses such as 'Anthem for Doomed Youth' and 'Strange Meeting', along with many of his lesser-known works. The elegiac poems of Ivor Gurney, including 'Requiem' and 'The Silent One', reflect his love of language, music and landscape, while the visceral works of Isaac Rosenberg, such as 'Break of Day in the Trenches', are filled with stark imagery but also, as in 'Louse Hunting', with vitality and humour. Each poet reflects the disparate experiences of ordinary soldiers in war, and attempts to capture man's humanity in the most inhumane of circumstances. This volume is accompanied by an introduction exploring each poet's life and early work, and tracing its development through the conflict. This edition also includes a table of dates, further reading and explanatory notes. Edited with an introduction and notes by JOHN STALLWORTHY and JANE POTTER

» Have you read this book? We'd like to know what you think about it - write a review about Three Poets of the First World War book by Isaac Rosenberg and you'll earn 50c in Boomerang Bucks loyalty dollars (you must be a Boomerang Books Account Holder - it's free to sign up and there are great benefits!)

Ivor Gurney, a gifted chorister, composer and poet, was born in 1890. His musical studies were interrupted by the war, during which he suffered a nervous breakdown in 1918. He spent the last fifteen years of his life in mental hospitals, dying of tuberculosis in 1937. Isaac Rosenberg was born in 1890 and grew up in London's East End. He studied painting at the Slade School before enlisting in the army in 1915. He was killed at the Somme in 1918. Wilfred Owen, born in 1893, grew up in Shropshire and initially hoped to become a priest. Having become disillusioned with the church, he tutored English in France, but returned to England in 1915 to enlist. He was killed at the front one week before the end of the war. Jon Stallworthy is Professor Emeritus of English at the University of Oxford. He is also a Fellow and Acting President of Wolfson College, a poet, and literary critic. Jane Potter is a Senior Lecturer in Publishing at Oxford Brookes University. Her monograph is entitled Boys in Khaki, Girls in Print: Women's Literary Responses to the Great War 1914-1918 (2005).

A Preview for this title is currently not available.
More Books By Isaac Rosenberg
View All