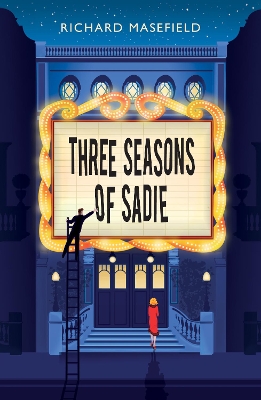 From bestselling author Richard Masefield comes a laugh-out-loud tale of life and love. Three Seasons of Sadie is a hilarious, bawdy coming-of-age comic drama set in a provincial theatre of the 1960s; the playful final episode in Richard Masefield's quintet of Sussex Novels. Frustrated by his lack of success with girls, 19-year-old Sam Ashby accepts the job of Assistant Stage Manager at the Meads Theatre in Eastbourne. Dazzled by the charms of the famous actress, Abigail Compton, whilst hopelessly attracted to her daughter, Sam progresses though a series of absurdly comic situations in his typically self-deprecating way. But when the frozen winter leads to an actor breaking a bone, the show must go on, and Sam steps in to save the day whilst crossing the shaky bridge to adulthood. AUTHOR: Richard Masefield comes from a family of writers - John Masefield was his cousin - and with a love of animals and the outdoors he decided at a young age that he would farm and write, if necessary both at once. It took years of hard work before Richard could realise his dream, and in fact his first published novel was written while milking a herd of Friesian cows. Several novels later he now lives in Kent with his wife Lee and together they spend as much time as possible with their large family of children and grandchildren.

» Have you read this book? We'd like to know what you think about it - write a review about Three Seasons of Sadie book by ,Richard Masefield and you'll earn 50c in Boomerang Bucks loyalty dollars (you must be a Boomerang Books Account Holder - it's free to sign up and there are great benefits!)


A Preview for this title is currently not available.
More Books By ,Richard Masefield
View All